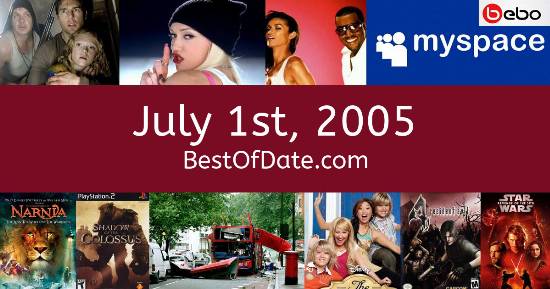 Songs that were on top of the music singles charts in the USA and the United Kingdom on July 1st, 2005.

The date is July 1st, 2005 and it's a Friday. Anyone born today will have the star sign Cancer. Currently, people have "that Friday feeling" and are looking forward to the weekend.

In America, the July 4th celebrations are fast approaching. It's summer, so the temperatures are warmer and the evenings are longer than usual. In America, the song We Belong Together by Mariah Carey is on top of the singles charts.

Over in the UK, Crazy Frog by Axel F is the number one hit song. George W. Bush Jnr. is currently the President of the United States and the movie War of the Worlds is at the top of the Box Office. In the United Kingdom, Tony Blair is the current Prime Minister.

Cameras on phones have become the norm. Furthermore, the quality of these cameras are continuing to increase with each new phone release. We are now entering into an age where any event can be photographed or recorded in an instant. Practically every teenager and adult has a MySpace or a Bebo account. It's 2005, so the music charts are being dominated by the likes of Mariah Carey, Gwen Stefani, Mario, Kelly Clarkson, 50 Cent, Kanye West and Ciara.

Satirical factoids about actor Chuck Norris are extremely popular at the moment. These "Chuck Norris Facts" consist of absurd hyperbolic claims about Norris' toughness. On TV, people are watching popular shows such as "7th Heaven", "The Sopranos", "CSI: Miami" and "The Apprentice". Meanwhile, gamers are playing titles such as "Counter-Strike: Source", "Brothers in Arms: Road to Hill 30", "God of War" and "Battlefield 2".

Children and teenagers are currently watching television shows such as "7th Heaven", "Teen Titans", "Peppa Pig" and "Avatar: The Last Airbender". Popular toys at the moment include the likes of the PlayStation 2, Bratz (dolls), Yu-Gi-Oh! Trading Card Game and the PSP.

George W. Bush Jnr. was the President of the United States on July 1st, 2005.

Tony Blair was the Prime Minister of the United Kingdom on July 1st, 2005.

Enter your date of birth below to find out how old you were on July 1st, 2005.

Here are some fun statistics about July 1st, 2005.