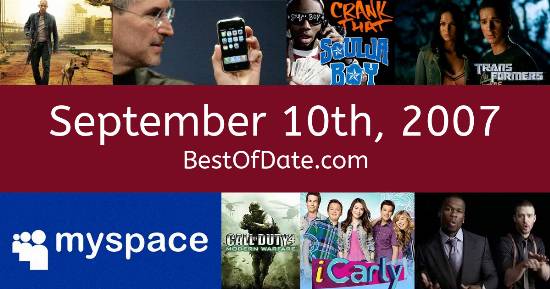 These songs were on top of the music charts in the United States and the United Kingdom on September 10th, 2007.

I was in the computer room in the university library when my classmate showed me Chris Crocker's video. It was a viral sensation at the time. I feel old knowing it was 15 years ago.
Posted on September 10th, 2022 09:00

The date is September 10th, 2007, and it's a Monday. Anyone born today will have the star sign Virgo. Schools and colleges are starting again and Autumn has officially arrived. As a result, temperatures are beginning to cool and trees are starting to shed their leaves.

In America, the song Crank That by Soulja Boy is on top of the singles charts. Over in the UK, Beautiful Girls by Sean Kingston is the number one hit song. George W. Bush Jnr. is currently the President of the United States, and the movie 3:10 to Yuma (2007) is at the top of the Box Office.

Meanwhile, in technology news, more and more people are beginning to use the Internet on their phones. This transition towards mobile Internet has been aided by the recent roll-out of faster 3G networks and the introduction of larger touchscreen phones. It's 2007, so the music charts are being dominated by the likes of Beyoncé, Rihanna, Jay-Z, Sean Kingston, Soulja Boy and Nelly Furtado. Financial markets are currently rattled and issues with the U.S. subprime mortgage sector seem to be spiraling out of control. American Home Mortgage recently filed for bankruptcy and international banking group BNP Paribas has blocked withdrawals from three of its hedge funds due to a lack of liquidity.

If you were to travel back to this day, notable figures such as Colin McRae, Ike Turner, Benazir Bhutto and Heath Ledger would all be still alive. On TV, people are watching popular shows such as "Boston Legal", "Desperate Housewives", "Grey's Anatomy" and "Hogan Knows Best". Meanwhile, gamers are playing titles such as "Just Cause", "Bully", "God of War II" and "BioShock".

Kids and teenagers are watching TV shows such as "Ed, Edd n Eddy", "Danny Phantom", "Zoey 101" and "Everybody Hates Chris". If you're a kid or a teenager, then you're probably playing with toys such as VideoNow (portable player), the PlayStation 3, Iggle Piggle and iPod Touch.

These are trending news stories and fads that were prevalent at this time. These are topics that would have been in the media on September 10th, 2007.

Check out our personality summary for people who were born on September 10th, 2007.

Television shows that people were watching in September, 2007.

Popular video games that people were playing in September of 2007.

If you are looking for some childhood nostalgia, then you should check out September 10th, 2013 instead.

George W. Bush Jnr. was the President of the United States on September 10th, 2007.

Gordon Brown was the Prime Minister of the United Kingdom on September 10th, 2007.

Enter your date of birth below to find out how old you were on September 10th, 2007.
This information is not transmitted to our server.

Here are some fun statistics about September 10th, 2007.