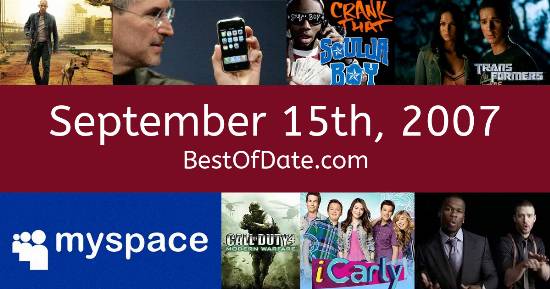 Songs that were on top of the music singles charts in the USA and the United Kingdom on September 15th, 2007.

The date is September 15th, 2007 and it's a Saturday. Anyone born today will have the star sign Virgo. Currently, people are enjoying their weekend.

Schools have started back and autumn has arrived, so temperatures have started to cool and trees are beginning to shed their leaves. The earthy smells of fall have started to fill the air. In America, the song Crank That by Soulja Boy is on top of the singles charts.

Over in the UK, Beautiful Girls by Sean Kingston is the number one hit song. George W. Bush Jnr. is currently the President of the United States and the movie The Brave One is at the top of the Box Office. In the United Kingdom, Gordon Brown is the current Prime Minister.

It's 2007, so the music charts are being dominated by the likes of Beyoncé, Rihanna, Jay-Z, Sean Kingston, Soulja Boy and Nelly Furtado. The global financial system is beginning to crack as the subprime mortgage crisis intensifies. In England, a "bank run" has occurred on the bank Northern Rock. Meanwhile, online bank "NetBank" has filed for bankruptcy protection due to its exposure to home loans. If you were to travel back to this day, notable figures such as Colin McRae, Benazir Bhutto, Heath Ledger and George Carlin would all be still alive.

On TV, people are watching popular shows such as "The Wire", "One Tree Hill", "Stargate Atlantis" and "It's Always Sunny in Philadelphia". Meanwhile, gamers are playing titles such as "Dead Rising", "Bully", "Marvel: Ultimate Alliance" and "The Legend of Zelda: Twilight Princess". Children and teenagers are currently watching television shows such as "Drake & Josh", "Peppa Pig", "Avatar: The Last Airbender" and "Phineas and Ferb".

If you're a kid or a teenager, then you're probably playing with toys such as the Xbox 360, the PlayStation 3, the Nintendo Wii and Iggle Piggle.

If you are looking for some childhood nostalgia, then check out September 15th, 2013 instead.

George W. Bush Jnr. was the President of the United States on September 15th, 2007.

Gordon Brown was the Prime Minister of the United Kingdom on September 15th, 2007.

Enter your date of birth below to find out how old you were on September 15th, 2007.

Here are some fun statistics about September 15th, 2007.