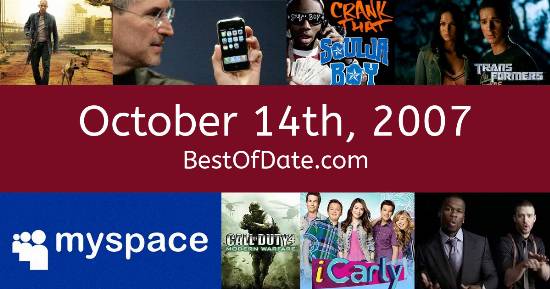 Songs that were on top of the music singles charts in the USA and the United Kingdom on October 14th, 2007.

The date is October 14th, 2007 and it's a Sunday. Anyone born today will have the star sign Libra. Currently, people are enjoying their weekend.

The summer is long gone. Temperatures have started to become much cooler and the evenings are beginning to get darker. Fallen leaves have carpeted driveways, lawns, pathways and sidewalks and there's a fresh earthy scent in the ear. In America, the song Crank That by Soulja Boy is on top of the singles charts.

Over in the UK, About You Now by Sugababes is the number one hit song. George W. Bush Jnr. is currently the President of the United States and the movie Why Did I Get Married? is at the top of the Box Office. In the United Kingdom, Gordon Brown is the current Prime Minister.

It's 2007, so the music charts are being dominated by the likes of Beyoncé, Rihanna, Jay-Z, Sean Kingston, Soulja Boy and Nelly Furtado. If you were to travel back to this day, notable figures such as Benazir Bhutto, Heath Ledger, George Carlin and Bernie Mac would all be still alive. On TV, people are watching popular shows such as "Futurama", "Cold Case", "House" and "How I Met Your Mother".

Meanwhile, gamers are playing titles such as "Marvel: Ultimate Alliance", "World in Conflict", "Team Fortress 2" and "Half-Life 2: Episode Two". Kids and teenagers are watching TV shows such as "Dora the Explorer", "The Suite Life of Zack & Cody", "Mickey Mouse Clubhouse" and "The Hills". Popular toys at the moment include the likes of VideoNow (portable player), the PlayStation 3, the Nintendo Wii and Iggle Piggle.

A Shot at Love with Tila Tequila
Dating game show that aired on MTV.

If you are looking for some childhood nostalgia, then check out October 14th, 2013 instead.

George W. Bush Jnr. was the President of the United States on October 14th, 2007.

Gordon Brown was the Prime Minister of the United Kingdom on October 14th, 2007.

Enter your date of birth below to find out how old you were on October 14th, 2007.

Here are some fun statistics about October 14th, 2007.