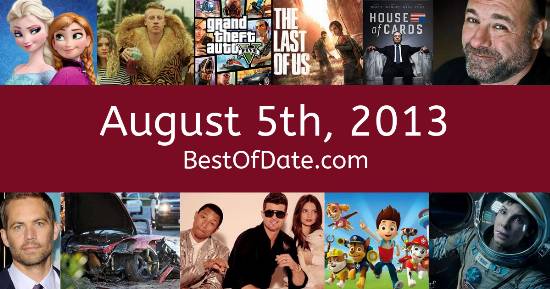 Songs that were on top of the music singles charts in the USA and the United Kingdom on August 5th, 2013.

The date is August 5th, 2013, and it's a Monday. Anyone born today will have the star sign Leo. It's summer, so the temperatures are warmer and the evenings are longer than usual.

In America, the song Blurred Lines by Robin Thicke is on top of the singles charts. Over in the UK, We Can't Stop by Miley Cyrus is the number one hit song. Barack Obama is currently the President of the United States, and the movie 2 Guns is at the top of the Box Office.

In Italy, former Prime Minister Silvio Berlusconi has been convicted of tax fraud. If you were to travel back to this day, notable figures such as Gia Allemand, Lisa Robin Kelly, Lee Thompson Young and Paul Walker would all be still alive. On TV, people are watching popular shows such as "Futurama", "Boardwalk Empire", "Game of Thrones" and "Homeland".

Meanwhile, gamers are playing titles such as "Dishonored", "Halo 4", "Call of Duty: Black Ops II" and "Far Cry 3". Children and teenagers are currently watching television shows such as "LazyTown", "Mickey Mouse Clubhouse", "Team Umizoomi" and "Jake and the Never Land Pirates". Popular toys at the moment include the likes of the Xbox 360, the PlayStation 3, Skylanders Giants figures and the Wii U.

These are trending news stories and fads that were prevalent at this time. These are topics that would have been in the media on August 5th, 2013.

News stories and other events that happened around August 5th, 2013.

Check out our personality summary for people who were born on August 5th, 2013.

If you are looking for some childhood nostalgia, then you should check out August 5th, 2019 instead.

American astronaut. Deceased
Born on August 5th, 1930
He was not alive on this date.

Beastie Boys member. Deceased
Born on August 5th, 1964
He was not alive on this date.

Barack Obama was the President of the United States on August 5th, 2013.

David Cameron was the Prime Minister of the United Kingdom on August 5th, 2013.

Find out what your age was on August 5th, 2013, by entering your DOB below.
This information is not saved on our server.

Here are some fun statistics about August 5th, 2013.