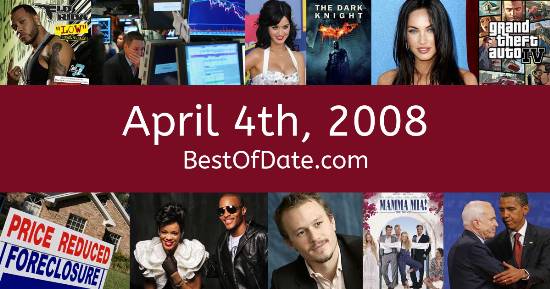 Songs that were on top of the music singles charts in the USA and the United Kingdom on April 4th, 2008:

The date is April 4th, 2008 and it's a Friday. Anyone born today will have the star sign Aries. Currently, people have "that Friday feeling" and are looking forward to the weekend.

The summer of 2008 is drawing closer and temperatures have started to rise. In America, the song Bleeding Love by Leona Lewis is on top of the singles charts. Over in the UK, American Boy by Estelle & Kanye West is the number one hit song.

George W. Bush Jnr. is currently the President of the United States and the movie 21 is at the top of the Box Office. In the United Kingdom, Gordon Brown is the current Prime Minister. Practically every teenager and adult has a MySpace or a Bebo account.

Gaming fans are currently excited about the upcoming release of Grand Theft Auto IV, which will be based on the life of Eastern European war veteran Niko Bellic in Liberty City. On TV, people are watching popular shows such as "Last of the Summer Wine", "Without a Trace", "Extreme Makeover: Home Edition" and "The Hills". Meanwhile, gamers are playing titles such as "Halo 3", "Portal", "Team Fortress 2" and "Uncharted: Drake's Fortune".

Kids and teenagers are watching TV shows such as "Dora the Explorer", "The Suite Life of Zack & Cody", "Ben 10" and "Hannah Montana". Popular toys include the likes of "Xbox 360", "PlayStation 3" and "iPod Touch".

Who was the Prime Minister of the United Kingdom on April 4th, 2008?

Enter your date of birth below to find out how old you were on April 4th, 2008.

Looking for some nostalgia? Here are some Youtube videos relating to April 4th, 2008. Please note that videos are automatically selected by Youtube and that results may vary! Click on the "Load Next Video" button to view the next video in the search playlist. In many cases, you'll find episodes of old TV shows, documentaries, music videos and soap dramas.

Here are some fun statistics about April 4th, 2008.