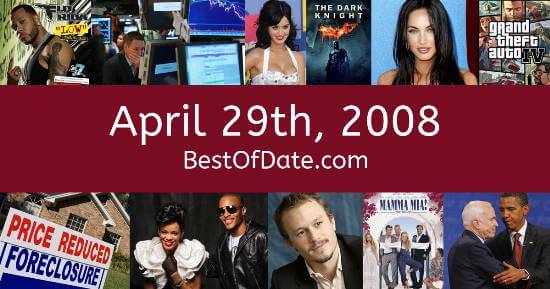 Songs that were on top of the music singles charts in the USA and the United Kingdom on April 29th, 2008.

The date is April 29th, 2008 and it's a Tuesday. Anyone born today will have the star sign Taurus. The summer of 2008 is drawing closer and temperatures have started to rise.

It's 2008, so the music charts are filled with artists such as Flo Rida, Katy Perry, Rihanna and T.I. If you were to travel back to this day, notable figures such as George Carlin, Bernie Mac, John Costelloe and Test would all be still alive. On TV, people are watching popular shows such as "Scrubs", "Lost", "Grey's Anatomy" and "Dexter".

Meanwhile, gamers are playing titles such as "Wii Sports", "Portal", "Call of Duty 4: Modern Warfare" and "Tom Clancy's Rainbow Six: Vegas 2". Kids and teenagers are watching TV shows such as "SpongeBob SquarePants", "Zoey 101", "Hannah Montana" and "The Hills". Popular toys at the moment include the likes of the Xbox 360, the PlayStation 3, Iggle Piggle and iPod Touch.

If you are looking for some childhood nostalgia, then check out April 29th, 2014 instead.

Stock car driver. Deceased
Born on April 29th, 1951
He was not alive on this date.

Gordon Brown was the Prime Minister of the United Kingdom on April 29th, 2008.

Enter your date of birth below to find out how old you were on April 29th, 2008.