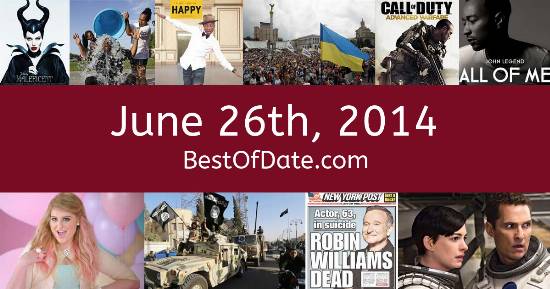 Songs that were on top of the music singles charts in the USA and the United Kingdom on June 26th, 2014:

The date is June 26th, 2014 and it's a Thursday. Anyone born today will have the star sign Cancer. It's summer, so the temperatures are warmer and the evenings are longer than usual.

In America, the song Fancy by Iggy Azalea featuring Charli XCX is on top of the singles charts. Over in the UK, Ghost by Ella Henderson is the number one hit song. Barack Obama is currently the President of the United States and the movie Think Like a Man Too is at the top of the Box Office.

The trial of Australian entertainer Rolf Harris for indecent assault is currently underway in England. An Islamic militant group called ISIS is beginning to seize large amounts territory in northern Iraq. The media is currently reporting that the group has seized control of Mosul, which is the second most populated city in Iraq. The 2014 FIFA World Cup is currently taking place in Brazil.

People are watching popular TV shows such as "Dora the Explorer", "Prison Break", "House of Cards" and "Rick and Morty". Meanwhile, gamers are playing titles such as "Dota 2", "Battlefield 4", "Call of Duty: Ghosts" and "Rust". Children and teenagers are currently watching television shows such as "Mickey Mouse Clubhouse", "Glee", "Jessie" and "Every Witch Way".

Celebrities and historical figures that were born on the 26th of June:

Who was the Prime Minister of the United Kingdom on June 26th, 2014?

Looking for some nostalgia? Here are some Youtube videos relating to June 26th, 2014. Please note that videos are automatically selected by Youtube and that results may vary! Click on the "Load Next Video" button to view the next video in the search playlist. In many cases, you'll find episodes of old TV shows, documentaries, music videos and soap dramas.