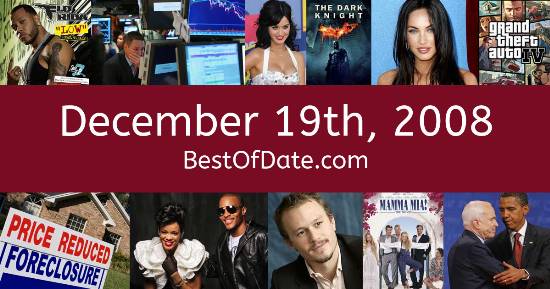 Songs that were on top of the music singles charts in the USA and the United Kingdom on December 19th, 2008.

The date is December 19th, 2008 and it's a Friday. Anyone born today will have the star sign Sagittarius. Currently, people have "that Friday feeling" and are looking forward to the weekend.

The Christmas season of 2008 is in full swing. The decorations are up and festive songs are playing on the radio. In America, the song Live Your Life by T.I. & Rihanna is on top of the singles charts. Over in the UK, Run by Leona Lewis is the number one hit song.

George W. Bush Jnr. is currently the President of the United States and the movie Yes Man is at the top of the Box Office. In the United Kingdom, Gordon Brown is the current Prime Minister. Practically every teenager and adult has a MySpace or a Bebo account.

It's 2008, so the music charts are filled with artists such as Flo Rida, Katy Perry, Rihanna and T.I. If you were to travel back to this day, notable figures such as Test, Natasha Richardson, Jade Goody and Farrah Fawcett would all be still alive. On TV, people are watching popular shows such as "Stargate Atlantis", "Lost", "The Hills" and "Sons of Anarchy".

Meanwhile, gamers are playing titles such as "Guitar Hero III: Legends of Rock", "Saints Row 2", "Fallout 3" and "Mirror's Edge". Kids and teenagers are watching TV shows such as "The Fairly OddParents", "LazyTown", "Mickey Mouse Clubhouse" and "Phineas and Ferb". If you're a kid or a teenager, then you're probably playing with toys such as the Xbox 360, the PlayStation 3, Iggle Piggle and WALL-E toys.

If you are looking for some childhood nostalgia, then check out December 19th, 2014 instead.

George W. Bush Jnr. was the President of the United States on December 19th, 2008.

Gordon Brown was the Prime Minister of the United Kingdom on December 19th, 2008.

Enter your date of birth below to find out how old you were on December 19th, 2008.

Here are some fun statistics about December 19th, 2008.