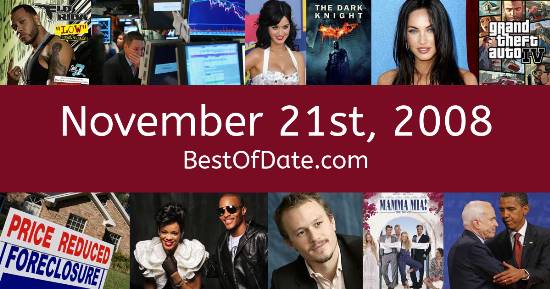 These songs were on top of the music charts in the United States and the United Kingdom on November 21st, 2008.

The top "Box Office" movie on this date was the film "Twilight".

The date is November 21st, 2008, and it's a Friday. Anyone born today will have the star sign Scorpio. Currently, people have "that Friday feeling" and are looking forward to the weekend.

George W. Bush Jnr. is currently the President of the United States, and the movie Twilight is at the top of the Box Office. In the United Kingdom, Gordon Brown is the current Prime Minister. Practically every teenager and adult has a MySpace or a Bebo account.

On TV, people are watching popular shows such as "King of the Hill", "Smallville", "Cold Case" and "Lost". Meanwhile, gamers are playing titles such as "Mass Effect", "Rock Band", "Tom Clancy's Rainbow Six: Vegas 2" and "Dead Space". Kids and teenagers are watching TV shows such as "One Tree Hill", "Everybody Hates Chris", "Ben 10" and "WordGirl".

If you're a kid or a teenager, then you're probably playing with toys such as the Xbox 360, the PlayStation 3, iPod Touch and WALL-E toys.

These are trending news stories and fads that were prevalent at this time. These are topics that would have been in the media on November 21st, 2008.

News stories and other events that happened around November 21st, 2008.

Check out our personality summary for people who were born on November 21st, 2008.

If you are looking for some childhood nostalgia, then you should check out November 21st, 2014 instead.

George W. Bush Jnr. was the President of the United States on November 21st, 2008.

Gordon Brown was the Prime Minister of the United Kingdom on November 21st, 2008.

Find out what your age was on November 21st, 2008, by entering your DOB below.
This information is not saved on our server.

Here are some fun statistics about November 21st, 2008.