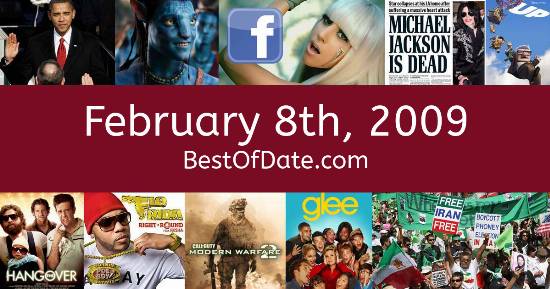 Songs that were on top of the music singles charts in the USA and the United Kingdom on February 8th, 2009.

The date is February 8th, 2009 and it's a Sunday. Anyone born today will have the star sign Aquarius. Currently, people are enjoying their weekend.

Valentine's Day is just around the corner. In America, the song My Life Would Suck Without You by Kelly Clarkson is on top of the singles charts. Over in the UK, The Fear by Lily Allen is the number one hit song.

Barack Obama is currently the President of the United States and the movie He's Just Not That Into You is at the top of the Box Office. In the United Kingdom, Gordon Brown is the current Prime Minister. A social network called Facebook is beginning to surge in popularity, replacing the likes of MySpace.

A music genre called Dubstep has started to go mainstream. It's 2009, so the music charts are filled with artists such as The Black Eyed Peas, Lady Gaga, Flo Rida, Taylor Swift and T.I. News has recently come to light that singer Chris Brown viciously assaulted his pop star girlfriend Rihanna.

On TV, people are watching popular shows such as "ER", "King of the Hill", "House" and "RuPaul's Drag Race". Meanwhile, gamers are playing titles such as "Grand Theft Auto IV", "Metal Gear Solid 4: Guns of the Patriots", "Dead Space" and "Fallout 3". Children and teenagers are currently watching television shows such as "One Tree Hill", "LazyTown", "Go, Diego, Go!" and "Wizards of Waverly Place".

Popular toys at the moment include the likes of the Xbox 360, the PlayStation 3 and WALL-E toys.

A Spotify playlist of hit songs from 2009. Take a trip back to the peak days of the Black Eyed Peas, Lady Gaga, Flo Rida and Tinchy Stryder.

Barack Obama was the President of the United States on February 8th, 2009.

Gordon Brown was the Prime Minister of the United Kingdom on February 8th, 2009.

Enter your date of birth below to find out how old you were on February 8th, 2009.

Here are some fun statistics about February 8th, 2009.

Leave a comment and tell everyone why February 8th, 2009 is important to you.