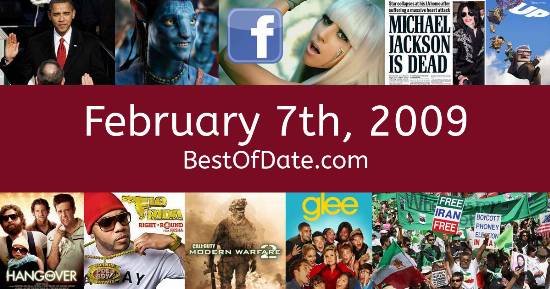 Songs that were on top of the music singles charts in the USA and the United Kingdom on February 7th, 2009.

The date is February 7th, 2009 and it's a Saturday. Anyone born today will have the star sign Aquarius. Currently, people are enjoying their weekend.

Valentine's Day is just around the corner. In America, the song My Life Would Suck Without You by Kelly Clarkson is on top of the singles charts. Over in the UK, The Fear by Lily Allen is the number one hit song.

Barack Obama is currently the President of the United States and the movie He's Just Not That Into You is at the top of the Box Office. In the United Kingdom, Gordon Brown is the current Prime Minister. Meanwhile, in technology news, more and more people are beginning to use the Internet on their phones. This transition towards mobile Internet has been aided by the recent roll-out of faster 3G networks and the introduction of larger touchscreen phones.

It's 2009, so the music charts are filled with artists such as The Black Eyed Peas, Lady Gaga, Flo Rida, Taylor Swift and T.I. On TV, people are watching popular shows such as "Dora the Explorer", "Cold Case", "Extreme Makeover: Home Edition" and "The Hills". Meanwhile, gamers are playing titles such as "Grand Theft Auto IV", "Mirror's Edge", "Call of Duty: World at War" and "Left 4 Dead".

Children and teenagers are currently watching television shows such as "Dora the Explorer", "Ben 10", "Hannah Montana" and "The Suite Life on Deck". If you're a kid or a teenager, then you're probably playing with toys such as the Xbox 360, the PlayStation 3 and WALL-E toys.

Celebrities, historical figures and notable people who were born on the 7th of February.

Barack Obama was the President of the United States on February 7th, 2009.

Gordon Brown was the Prime Minister of the United Kingdom on February 7th, 2009.

Enter your date of birth below to find out how old you were on February 7th, 2009.

Here are some fun statistics about February 7th, 2009.

Have something to say about February 7th, 2009?