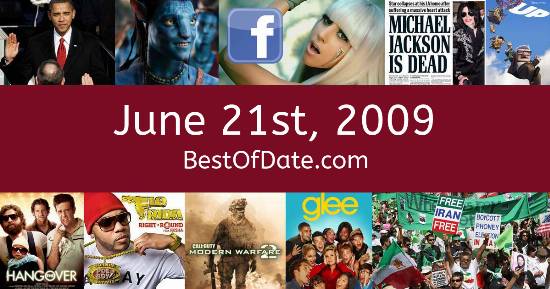 June 21st, 2009 relates to an event in a movie, book, game or television series:

Songs that were on top of the music singles charts in the USA and the United Kingdom on June 21st, 2009:

The date is June 21st, 2009 and it's a Sunday. Anyone born today will have the star sign Cancer. Currently, people are enjoying their weekend.

It's summer, so the temperatures are warmer and the evenings are longer than usual. In America, the song Boom Boom Pow by Black Eyed Peas is on top of the singles charts. Over in the UK, When Love Takes Over by David Guetta ft Kelly Rowland is the number one hit song.

Barack Obama is currently the President of the United States and the movie The Proposal is at the top of the Box Office. In the United Kingdom, Gordon Brown is the current Prime Minister. A social network called Facebook is beginning to surge in popularity, replacing the likes of MySpace.

In Iran, the "Green Revolution" is taking place, as protests and violence break out following the re-election of President Mahmoud Ahmadinejad. On TV, people are watching popular shows such as "Two and a Half Men", "Lost", "CSI: NY" and "Real Housewives of New York City". Meanwhile, gamers are playing titles such as "Saints Row 2", "Dead Space", "Mirror's Edge" and "Call of Duty: World at War".

Kids and teenagers are watching TV shows such as "The Fairly OddParents", "Peppa Pig", "Mickey Mouse Clubhouse" and "Curious George". Popular toys include the likes of "Xbox 360", "PlayStation 3" and "WALL-E toys".

Celebrities, historical figures and noteable people who were born on the 21st of June:

Who was the Prime Minister of the United Kingdom on June 21st, 2009?

Looking for some nostalgia? Here are some Youtube videos relating to June 21st, 2009. Please note that videos are automatically selected by Youtube and that results may vary! Click on the "Load Next Video" button to view the next video in the search playlist. In many cases, you'll find episodes of old TV shows, documentaries, music videos and soap dramas.