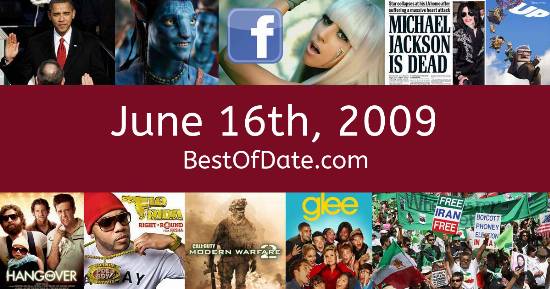 These songs were on top of the music charts in the United States and the United Kingdom on June 16th, 2009.

The movie "The Hangover" was at the top of the Box Office on this day.

And that everyone was when MySpace officially started it's death toll as Facebook and Twitter suddenly took charge with people flocking to them further.
Posted on June 13th, 2022 01:46

The date is June 16th, 2009, and it's a Tuesday. Anyone born today will have the star sign Gemini. It's summer, so the temperatures are warmer and the evenings are longer than usual.

In America, the song Boom Boom Pow by Black Eyed Peas is on top of the singles charts. Over in the UK, When Love Takes Over by David Guetta ft Kelly Rowland is the number one hit song. Barack Obama is currently the President of the United States, and the movie The Hangover is at the top of the Box Office.

The term "hipster" is currently growing in use. The word is being used to describe people who are pretentious and deliberately anti-mainstream. In Iran, the "Green Revolution" is taking place, as protests and violence break out following the re-election of President Mahmoud Ahmadinejad. If you were to travel back to this day, notable figures such as Farrah Fawcett, Michael Jackson, Billy Mays and DJ AM would all be still alive.

On TV, people are watching popular shows such as "Scrubs", "Two and a Half Men", "Extreme Makeover: Home Edition" and "Prison Break". Meanwhile, gamers are playing titles such as "Mafia Wars", "Spore", "Killzone 2" and "Resident Evil 5". Kids and teenagers are watching TV shows such as "Dora the Explorer", "LazyTown", "Curious George" and "Sonny with a Chance".

These are trending news stories and fads that were prevalent at this time. These are topics that would have been in the media on June 16th, 2009.

Check out our personality summary for people who were born on June 16th, 2009.

If you are looking for some childhood nostalgia, then you should check out June 16th, 2015 instead.

Barack Obama was the President of the United States on June 16th, 2009.

Gordon Brown was the Prime Minister of the United Kingdom on June 16th, 2009.

Enter your date of birth below to find out how old you were on June 16th, 2009.
This information is not transmitted to our server.