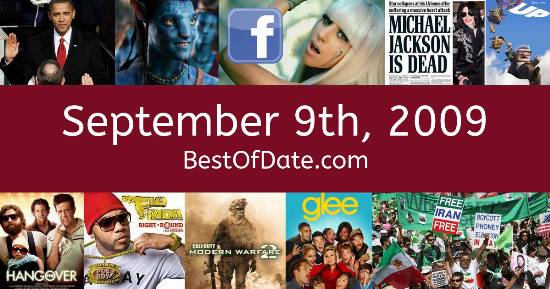 Songs that were on top of the music singles charts in the USA and the United Kingdom on September 9th, 2009.

The movie "The Final Destination" was at the top of the box office on September 9th, 2009.

The date is September 9th, 2009 and it's a Wednesday. Anyone born today will have the star sign Virgo. Schools have started back and autumn has arrived, so temperatures have started to cool and trees are beginning to shed their leaves.

In America, the song I Gotta Feeling by Black Eyed Peas is on top of the singles charts. Over in the UK, Boys And Girls by Pixie Lott is the number one hit song. Barack Obama is currently the President of the United States and the movie The Final Destination is at the top of the Box Office.

The term "hipster" is currently growing in use. The word is being used to describe people who are pretentious and deliberately anti-mainstream. On TV, people are watching popular shows such as "Lost", "CSI: NY", "Breaking Bad" and "Real Housewives of New York City". Meanwhile, gamers are playing titles such as "Mirror's Edge", "Left 4 Dead", "Minecraft" and "Batman: Arkham Asylum".

Kids and teenagers are watching TV shows such as "Dora the Explorer", "Curious George", "Phineas and Ferb" and "Glee". Popular toys at the moment include the likes of the Xbox 360, the PlayStation 3 and WALL-E toys.

If you are looking for some childhood nostalgia, then check out September 9th, 2015 instead.

Celebrities, historical figures and notable people who were born on the 9th of September.

Barack Obama was the President of the United States on September 9th, 2009.

Gordon Brown was the Prime Minister of the United Kingdom on September 9th, 2009.

Enter your date of birth below to find out how old you were on September 9th, 2009.

Here are some fun statistics about September 9th, 2009.

Have something to say about September 9th, 2009?