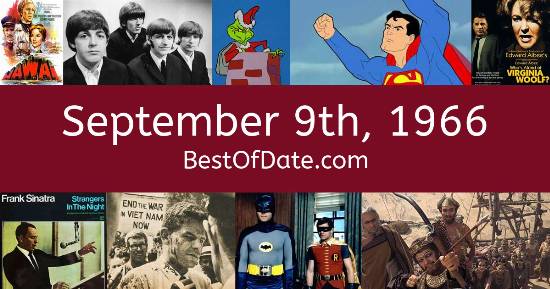 These songs were on top of the music charts in the United States and the United Kingdom on September 9th, 1966.

The movie "How to Steal a Million" was at the top of the Box Office on September 9th, 1966.

The date is September 9th, 1966, and it's a Friday. Anyone born today will have the star sign Virgo. Currently, people have "that Friday feeling" and are looking forward to the weekend.

Schools and colleges are starting again and Autumn has officially arrived. As a result, temperatures are beginning to cool and trees are starting to shed their leaves. In America, the song Sunshine Superman by Donovan is on top of the singles charts. Over in the UK, Yellow Submarine / Eleanor Rigby by The Beatles is the number one hit song.

Lyndon Baines Johnson is currently the President of the United States, and the movie How to Steal a Million is at the top of the Box Office. In the United Kingdom, Harold Wilson is the current Prime Minister. Because it is 1966, radio stations are playing hit songs from music artists such as Frank Sinatra, The Beatles, The Beach Boys, SSgt Barry Sadler, The Association and The Supremes.

In fashion, a new "hippie subculture" has emerged, bringing with it laid back Bohemian styles. Frayed bell-bottomed jeans, Jesus sandals, crushed velvet suits and bright tie-dye t-shirts are all popular items of clothing at the moment. If you were to travel back to this day, notable figures such as Walt Disney, Jayne Mansfield, Che Guevara and Otis Redding would all be still alive. On TV, people are watching popular shows such as "Danger Man", "Gilligan's Island", "I Dream of Jeannie" and "Dark Shadows".

Kids and teenagers are watching TV shows such as "Tom and Jerry", "Captain Kangaroo", "Underdog" and "Thunderbirds". Popular toys at the moment include the likes of Matchbox toy cars, the Easy-Bake Oven, Motorific (slot car toys) and Operation.

These are trending news stories and fads that were prevalent at this time. These are topics that would have been in the media on September 9th, 1966.

News stories and other events that happened around September 9th, 1966.

Check out our personality summary for people who were born on September 9th, 1966.

Television shows that people were watching in September, 1966.

If you are looking for some childhood nostalgia, then you should check out September 9th, 1972 instead.

Singer.
Born on September 9th, 1975
He was born exactly 9 years after this date.

Rapper. Deceased
Born on September 9th, 1977
He was born exactly 11 years after this date.

Actress.
Born on September 9th, 1980
She was born exactly 14 years after this date.

Soccer player.
Born on September 9th, 1985
He was born exactly 19 years after this date.

UFC fighter.
Born on September 9th, 1986
He was born exactly 20 years after this date.

Lyndon Baines Johnson was the President of the United States on September 9th, 1966.

Find out what your age was on September 9th, 1966, by entering your DOB below.
This information is not saved on our server.

Here are some fun statistics about September 9th, 1966.