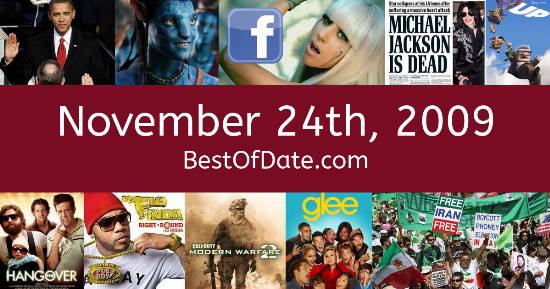 On November 24th, 2009, the following songs were at the top of the music charts in the USA and the UK.

The date is November 24th, 2009, and it's a Tuesday. Anyone born today will have the star sign Sagittarius. In America, Thanksgiven Day of 2009 is just around the corner.

It's November, so the evenings are getting darker and the days are getting colder. In America, the song Empire State Of Mind by Jay-Z ft Alicia Keys is on top of the singles charts. Over in the UK, Children In Need Medley by Peter Kay's Animated All Star Band is the number one hit song.

Barack Obama is currently the President of the United States, and the movie 2012 is at the top of the Box Office. In the United Kingdom, Gordon Brown is the current Prime Minister. Meanwhile, in technology news, more and more people are beginning to use the Internet on their phones. This transition towards mobile Internet has been aided by the recent roll-out of faster 3G networks and the introduction of larger touchscreen phones.

It's 2009, so the music charts are filled with artists such as The Black Eyed Peas, Lady Gaga, Flo Rida, Taylor Swift and T.I. The term "hipster" is currently growing in use. The word is being used to describe people who are pretentious and deliberately anti-mainstream. The game "Call of Duty: Modern Warfare 2" has just been released.

If you were to travel back to this day, notable figures such as Umaga, Brittany Murphy, Corey Haim and Chris Kanyon would all be still alive. On TV, people are watching popular shows such as "One Tree Hill", "The Office", "Psych" and "White Collar". Meanwhile, gamers are playing titles such as "Grand Theft Auto: Chinatown Wars", "Farmville", "Halo 3: ODST" and "Uncharted 2: Among Thieves".

Kids and teenagers are watching TV shows such as "The Fairly OddParents", "Peppa Pig", "Hannah Montana" and "Curious George". Popular toys at the moment include the likes of the Xbox 360, the PlayStation 3, Iggle Piggle and WALL-E toys.

These are trending news stories and fads that were prevalent at this time. These are topics that would have been in the media on November 24th, 2009.

Check out our personality summary for people who were born on November 24th, 2009.

Television shows that people were watching in November, 2009.

Popular video games that people were playing in November of 2009.

If you are looking for some childhood nostalgia, then you should check out November 24th, 2015 instead.

Barack Obama was the President of the United States on November 24th, 2009.

Enter your date of birth below to find out how old you were on November 24th, 2009.
This information is not transmitted to our server.

Here are some fun statistics about November 24th, 2009.