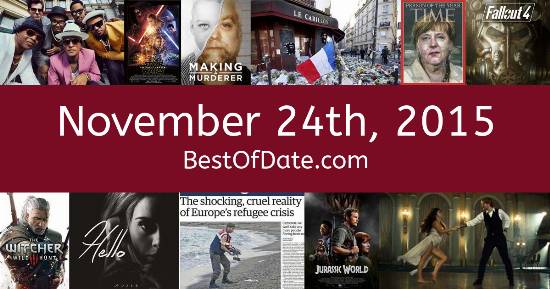 On November 24th, 2015, the following songs were at the top of the music charts in the USA and the UK.

The top "Box Office" movie on this date was the film "The Hunger Games: Mockingjay - Part 2".

Everyone thought that WW3 was about to kick off after Turkey downed that jet.
Posted on November 24th, 2022 22:26

The date is November 24th, 2015, and it's a Tuesday. Anyone born today will have the star sign Sagittarius. In America, Thanksgiven Day of 2015 is just around the corner.

It's November, so the evenings are getting darker and the days are getting colder. The song Hello by Adele is on top of the singles charts in both the USA and the United Kingdom. Barack Obama is currently the President of the United States, and the movie The Hunger Games: Mockingjay - Part 2 is at the top of the Box Office.

Meanwhile, a gesture called "the Dab" is beginning to take off in popularity. Sports stars in particular are starting to incorporate the move into their celebrations. Actor Charlie Sheen has announced that he is HIV positive. Popular men's magazine FHM has said that it will be suspending its publication. In Ireland, the first same-sex marriages have taken place. This follows a referendum that took place May, in which the people of Ireland voted to legalize gay marriage. Tensions are currently simmering in the Middle East following Turkey's decision to shoot down a Russian military jet at the border between Turkey and Syria.

If you were to travel back to this day, notable figures such as Lemmy, David Bowie, Angela Raiola and Rob Ford would all be still alive. On TV, people are watching popular shows such as "The Vampire Diaries", "Suits", "Homeland" and "Narcos - Season 1". Meanwhile, gamers are playing titles such as "Minecraft", "Battlefield Hardline", "Batman: Arkham Knight" and "Call of Duty: Black Ops III".

Children and teenagers are currently watching television shows such as "Mickey Mouse Clubhouse", "Jake and the Never Land Pirates", "Lab Rats: Bionic Island" and "Girl Meets World". If you're a kid or a teenager, then you're probably playing with toys such as the Furby Boom, the PlayStation 4, Frozen toys and Barbie Saddle n Ride.

These are trending news stories and fads that were prevalent at this time. These are topics that would have been in the media on November 24th, 2015.

Check out our personality summary for people who were born on November 24th, 2015.

Television shows that people were watching in November, 2015.

Popular video games that people were playing in November of 2015.

If you are looking for some childhood nostalgia, then you should check out November 24th, 2021 instead.

Barack Obama was the President of the United States on November 24th, 2015.

Enter your date of birth below to find out how old you were on November 24th, 2015.
This information is not transmitted to our server.

Here are some fun statistics about November 24th, 2015.