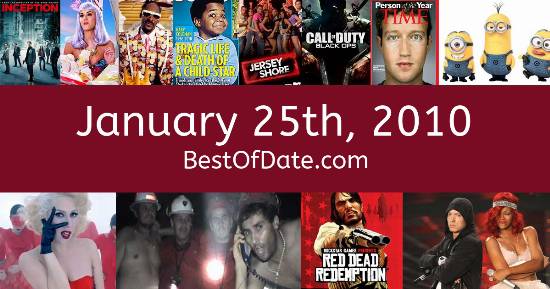 Songs that were on top of the music singles charts in the USA and the United Kingdom on January 25th, 2010.

The date is January 25th, 2010 and it's a Monday. Anyone born today will have the star sign Aquarius. In America, the song Tik Tok by Kesha is on top of the singles charts.

Over in the UK, Fireflies by Owl City is the number one hit song. Barack Obama is currently the President of the United States and the movie Avatar is at the top of the Box Office. In the United Kingdom, Gordon Brown is the current Prime Minister.

The catastrophic earthquake that struck Haiti on the 12th has left hundreds of thousands of people dead. Over a quarter of a million buildings have been left in ruins. In response to the disaster, many countries have been pledging humanitarian aid and relief funds. The search for survivors has officially been called off after 10 days and the most-watched telethon in history has just raised US$58 million for the country. Conan O'Brien has been replaced by Jay Leno as the host of "The Tonight Show" after only 7 months of being in charge. The move has sparked controversy amongst fans, many of whom believe that Conan is a better host than Jay Leno. 90 people have tragically lost their lives after Ethiopian Airlines Flight 409 crashed into the Mediterranean Sea.

On TV, people are watching popular shows such as "Desperate Housewives", "Prison Break", "Glee" and "The Vampire Diaries". Meanwhile, gamers are playing titles such as "Mafia Wars", "Farmville", "Batman: Arkham Asylum" and "Borderlands". Children and teenagers are currently watching television shows such as "One Tree Hill", "Ben 10", "Wizards of Waverly Place" and "Big Time Rush".

Popular toys at the moment include the likes of the Xbox 360, the PlayStation 3 and ZhuZhu Pets.

If you are looking for some childhood nostalgia, then check out January 25th, 2016 instead.

Celebrities, historical figures and notable people who were born on the 25th of January.

Barack Obama was the President of the United States on January 25th, 2010.

Gordon Brown was the Prime Minister of the United Kingdom on January 25th, 2010.

Enter your date of birth below to find out how old you were on January 25th, 2010.

Here are some fun statistics about January 25th, 2010.