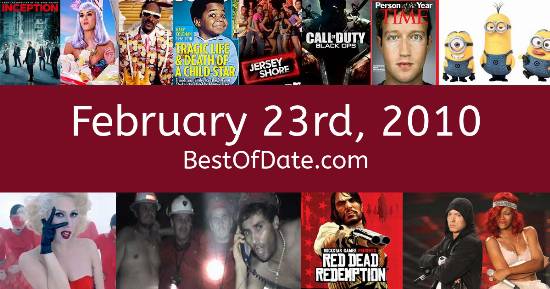 Songs that were on top of the music singles charts in the USA and the United Kingdom on February 23rd, 2010:

The date is February 23rd, 2010 and it's a Tuesday. Anyone born today will have the star sign Pisces. In America, the song Tik Tok by Kesha is on top of the singles charts.

Over in the UK, Everybody Hurts by Helping Haiti is the number one hit song. Barack Obama is currently the President of the United States and the movie Valentine's Day is at the top of the Box Office. In the United Kingdom, Gordon Brown is the current Prime Minister.

The term "hipster" is currently growing in use. The word is being used to describe people who are pretentious and deliberately anti-mainstream. It's 2010, so the music charts are being dominated by artists such as Kesha, Katy Perry, Rihanna, Eminem and Bruno Mars. Relief efforts following last month's catastrophic earthquake in Haiti are still ongoing.

An Old Spice advertisement called "The Man Your Man Could Smell Like", starring Isaiah Mustafa, is extremely popular at the moment. The slang phrase "Come at me bro" is starting to become popular on the Internet. The 2010 Winter Olympics are currently taking place in Vancouver, Canada.

In a recent televised statement, golfer Tiger Woods apologized for cheating on his wife and stated that he had undergone a 45-day therapy program. It has been announced that soccer star Ashley Cole and pop singer Cheryl Tweedy will be separating. The announcement follows allegations that Cole had been unfaithful on a number of occasions. People are watching popular TV shows such as "Smallville", "Bones", "Community" and "Jersey Shore".

Meanwhile, gamers are playing titles such as "Resident Evil 5", "Assassin's Creed II", "Left 4 Dead 2" and "Mass Effect 2". Kids and teenagers are watching TV shows such as "LazyTown", "Go, Diego, Go!", "iCarly" and "The Suite Life on Deck". If you're a kid or a teenager, then you're probably playing with toys such as "Xbox 360", "PlayStation 3" and "ZhuZhu Pets".

Who was the Prime Minister of the United Kingdom on February 23rd, 2010?

Enter your date of birth below to find out how old you were on February 23rd, 2010.

Looking for some nostalgia? Here are some Youtube videos relating to February 23rd, 2010. Please note that videos are automatically selected by Youtube and that results may vary! Click on the "Load Next Video" button to view the next video in the search playlist. In many cases, you'll find episodes of old TV shows, documentaries, music videos and soap dramas.

Here are some fun statistics about February 23rd, 2010.