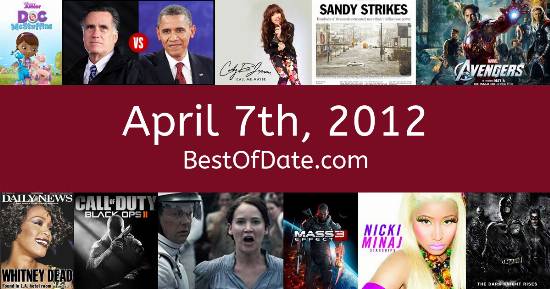 Songs that were on top of the music singles charts in the USA and the United Kingdom on April 7th, 2012:

The date is April 7th, 2012 and it's a Saturday. Anyone born today will have the star sign Aries. Currently, people are enjoying their weekend.

The summer of 2012 is drawing closer and temperatures have started to rise. In America, the song We Are Young by Fun ft Janelle Monae is on top of the singles charts. Over in the UK, Turn Up The Music by Chris Brown is the number one hit song.

Barack Obama is currently the President of the United States and the movie 21 Jump Street is at the top of the Box Office. In the United Kingdom, David Cameron is the current Prime Minister. Pre-made comics called "Rage Comics" are extremely popular on the Internet at the moment, as people use them to share relatable experiences.

It's 2012, so the music charts are being dominated by artists such as Carly Rae Jepsen, Gotye, Flo Rida, LMFAO and Ellie Goulding. An app called Instagram is currently surging in popularity. The Matrix character "Morpheus" has become a new Internet meme.. The meme typically starts off with the line "What if I told you", followed by a revelation that the creator wants to share.

A meme called "Ridiculously Photogenic Guy" is extremely popular at the moment. American actress Amanda Bynes is currently in the news for all of the wrong reasons after she clipped a police car and got arrested for driving while under the influence. A video of Oklahoma City resident Kimberly Wilkins saying "Ain't Nobody Got Time for That" during an interview with a local news station is currently going viral. The interview has sparked the creation of several remixes.

On TV, people are watching popular shows such as "CSI: NY", "Sons of Anarchy", "Community" and "Homeland". Meanwhile, gamers are playing titles such as "Batman: Arkham City", "Call of Duty: Modern Warfare 3", "Saints Row: The Third" and "Mass Effect 3". Kids and teenagers are watching TV shows such as "Peppa Pig", "Glee", "Jake and the Never Land Pirates" and "Lab Rats: Bionic Island".

Who was the Prime Minister of the United Kingdom on April 7th, 2012?

Enter your date of birth below to find out how old you were on April 7th, 2012.

Looking for some nostalgia? Here are some Youtube videos relating to April 7th, 2012. Please note that videos are automatically selected by Youtube and that results may vary! Click on the "Load Next Video" button to view the next video in the search playlist. In many cases, you'll find episodes of old TV shows, documentaries, music videos and soap dramas.

Here are some fun statistics about April 7th, 2012.