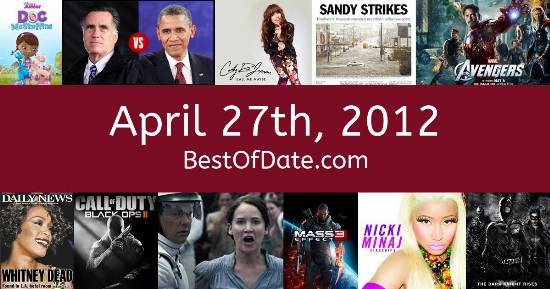 On April 27th, 2012, the following songs were at the top of the music charts in the USA and the UK.

The top "Box Office" movie on this date was the film "Think Like a Man".

The date is April 27th, 2012, and it's a Friday. Anyone born today will have the star sign Taurus. Currently, people have "that Friday feeling" and are looking forward to the weekend.

The summer of 2012 is drawing closer and temperatures have started to rise. In America, the song Somebody That I Used To Know by Gitye ft Kimbra is on top of the singles charts. Over in the UK, Call Me Maybe by Carly Rae Jepsen is the number one hit song.

Barack Obama is currently the President of the United States, and the movie Think Like a Man is at the top of the Box Office. In the United Kingdom, David Cameron is the current Prime Minister. Video rental stores such as Blockbuster are continuing to close their doors at the moment. This is due to the increasing popularity of online streaming services such as Netflix and Hulu.

The Matrix character "Morpheus" has become a new Internet meme.. The meme typically starts off with the line "What if I told you", followed by a revelation that the creator wants to share. A meme called "Ridiculously Photogenic Guy" is extremely popular at the moment. A video of Oklahoma City resident Kimberly Wilkins saying "Ain't Nobody Got Time for That" during an interview with a local news station is currently going viral. The interview has sparked the creation of several memes and music remixes over the past couple of weeks.

The hit song "Call Me Maybe" by Carly Rae Jepsen is currently the subject of a number of parody and lip dub videos. 127 people have tragically lost their lives following Bhoja Air Flight 213's crash near Rawalpindi in Pakistan. In soccer, Chelsea have unexpectedly defeated Barcelona in the semi-finals of the Champions League, despite having a man sent off. A late goal from Fernando Torres sealed Chelsea's spot in the final against Bayern Munich. People are currently laughing at the dramatic reaction to the goal by Sky Sports commentator Gary Neville. Meanwhile, Barcelona manager Pep Guardiola has announced that he will be stepping down at the end of the season.

If you were to travel back to this day, notable figures such as MCA, Rodney King, Sherman Hemsley and Neil Armstrong would all be still alive. On TV, people are watching popular shows such as "RuPaul's Drag Race", "Glee", "Community" and "Homeland". Meanwhile, gamers are playing titles such as "Terraria", "Battlefield 3", "Minecraft" and "Journey".

Kids and teenagers are watching TV shows such as "Dora the Explorer", "iCarly", "Jake and the Never Land Pirates" and "Lab Rats: Bionic Island". Popular toys at the moment include the likes of the PlayStation 3, the KidiZoom Camera, the LeapPad Explorer and Skylanders Giants figures.

These are trending news stories and fads that were prevalent at this time. These are topics that would have been in the media on April 27th, 2012.

News stories and other events that happened around April 27th, 2012.

Check out our personality summary for people who were born on April 27th, 2012.

Television shows that people were watching in April, 2012.

Popular video games that people were playing in April of 2012.

If you are looking for some childhood nostalgia, then you should check out April 27th, 2018 instead.

Barack Obama was the President of the United States on April 27th, 2012.

David Cameron was the Prime Minister of the United Kingdom on April 27th, 2012.

Find out what your age was on April 27th, 2012, by entering your DOB below.
This information is not saved on our server.