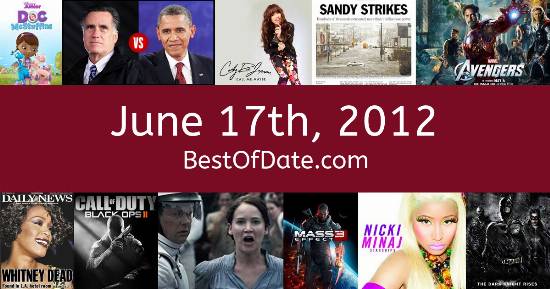 Songs that were on top of the music singles charts in the USA and the United Kingdom on June 17th, 2012:

The date is June 17th, 2012 and it's a Sunday. Anyone born today will have the star sign Gemini. Currently, people are enjoying their weekend.

It's summer, so the temperatures are warmer and the evenings are longer than usual. In America, the song Somebody That I Used To Know by Gitye ft Kimbra is on top of the singles charts. Over in the UK, Sing by Gary Barlow & Commonwealth Band is the number one hit song.

Barack Obama is currently the President of the United States and the movie Madagascar 3 is at the top of the Box Office. In the United Kingdom, David Cameron is the current Prime Minister. Pre-made comics called "Rage Comics" are extremely popular on the Internet at the moment, as people use them to share relatable experiences.

A Youtube video by Laina Morris parodying an "Overly Attached Girlfriend" is currently going viral at the moment. The success of the video has led to "Overly Attached Girlfriend" becoming a meme. In Poland and Ukraine, the 2012 UEFA European Football Championship is taking place. Actor David Arquette has filed for divorce from Friends star Courtney Cox following two years of separation.

TMZ is reporting that rapper Drake and his entourage have been involved in a scuffle with Chris Brown at a nightclub in New York City. Rodney King, who became a household name following an infamous police brutality case in 1991, has been found dead in his swimming pool. On TV, people are watching popular shows such as "Sons of Anarchy", "The Vampire Diaries", "Modern Family" and "Game of Thrones".

Meanwhile, gamers are playing titles such as "Battlefield 3", "The Elder Scrolls V: Skyrim", "Saints Row: The Third" and "Diablo III". Kids and teenagers are watching TV shows such as "The Fairly OddParents", "Peppa Pig", "LazyTown" and "iCarly". Popular toys include the likes of "Xbox 360", "PlayStation 3" and "The LeapPad Explorer".

Who was the Prime Minister of the United Kingdom on June 17th, 2012?

Looking for some nostalgia? Here are some Youtube videos relating to June 17th, 2012. Please note that videos are automatically selected by Youtube and that results may vary! Click on the "Load Next Video" button to view the next video in the search playlist. In many cases, you'll find episodes of old TV shows, documentaries, music videos and soap dramas.