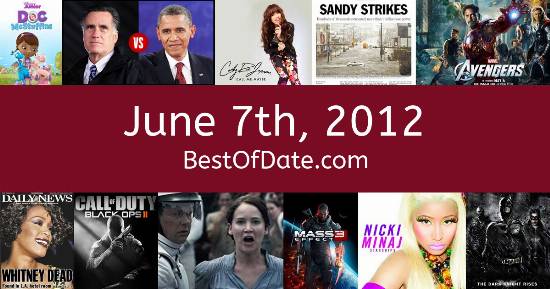 These songs were on top of the music charts in the United States and the United Kingdom on June 7th, 2012.

The movie "Snow White and the Huntsman" was at the top of the Box Office on June 7th, 2012.

The date is June 7th, 2012, and it's a Thursday. Anyone born today will have the star sign Gemini. It's summer, so the temperatures are warmer and the evenings are longer than usual.

In America, the song Somebody That I Used To Know by Gitye ft Kimbra is on top of the singles charts. Over in the UK, Feel The Love by Rudimental ft John Newman is the number one hit song. Barack Obama is currently the President of the United States, and the movie Snow White and the Huntsman is at the top of the Box Office.

It's 2012, so the music charts are being dominated by artists such as Carly Rae Jepsen, Gotye, Flo Rida, LMFAO and Ellie Goulding. Meanwhile, a new photo-sharing app called Instagram is currently surging in popularity. The hit song "Call Me Maybe" by Carly Rae Jepsen is currently the subject of a number of parody and lip dub videos.

In soccer, Eden Hazard has announced that he will be signing for Chelsea. Mitt Romney has beaten the likes of Newt Gingrich, Ron Paul and Rick Santorum to become the Republican candidate for the 2012 US presidential election. A Youtube video by Laina Morris parodying an "Overly Attached Girlfriend" is currently going viral at the moment. The success of the video has led to "Overly Attached Girlfriend" becoming a meme.

If you were to travel back to this day, notable figures such as Rodney King, Sherman Hemsley, Neil Armstrong and Michael Clarke Duncan would all be still alive. On TV, people are watching popular shows such as "Breaking Bad", "White Collar", "Game of Thrones" and "Black Mirror". Meanwhile, gamers are playing titles such as "Terraria", "Minecraft", "The Walking Dead" and "Diablo III".

Kids and teenagers are watching TV shows such as "Phineas and Ferb", "WordGirl", "Austin & Ally" and "Doc McStuffins". If you're a kid or a teenager, then you're probably playing with toys such as the Xbox 360, the PlayStation 3, the LeapPad Explorer and Skylanders Giants figures.

These are trending news stories and fads that were prevalent at this time. These are topics that would have been in the media on June 7th, 2012.

News stories and other events that happened around June 7th, 2012.

Check out our personality summary for people who were born on June 7th, 2012.

Television shows that people were watching in June, 2012.

Popular video games that people were playing in June of 2012.

If you are looking for some childhood nostalgia, then you should check out June 7th, 2018 instead.

Singer. Deceased
Born on June 7th, 1917
He was not alive on this date.

Libyan leader. Deceased
Born on June 7th, 1942
He was not alive on this date.

Barack Obama was the President of the United States on June 7th, 2012.

David Cameron was the Prime Minister of the United Kingdom on June 7th, 2012.

Find out what your age was on June 7th, 2012, by entering your DOB below.
This information is not saved on our server.

Here are some fun statistics about June 7th, 2012.