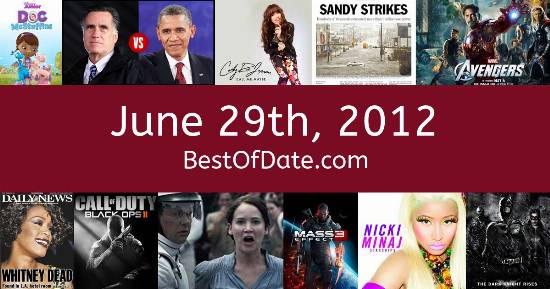 Songs that were on top of the music singles charts in the USA and the United Kingdom on June 29th, 2012:

The date is June 29th, 2012 and it's a Friday. Anyone born today will have the star sign Cancer. Currently, people have "that Friday feeling" and are looking forward to the weekend.

It's summer, so the temperatures are warmer and the evenings are longer than usual. In America, the song Call Me Maybe by Carly Rae Jepsen is on top of the singles charts. Over in the UK, Payphone by Maroon 5 is the number one hit song.

Barack Obama is currently the President of the United States and the movie Ted is at the top of the Box Office. In the United Kingdom, David Cameron is the current Prime Minister. Pre-made comics called "Rage Comics" are extremely popular on the Internet at the moment, as people use them to share relatable experiences.

French striker Olivier Giroud has joined London side Arsenal from Montpellier. Mario Balotelli's goal celebration against Germany in the semi final of UEFA Euro 2012 has sparked the creation of dozens of Photoshopped memes. In celebrity news, Katie Holmes has filed for divorce from Tom Cruise.

On TV, people are watching popular shows such as "Desperate Housewives", "Modern Family", "Suits" and "American Horror Story". Meanwhile, gamers are playing titles such as "Gears of War 3", "Batman: Arkham City", "The Elder Scrolls V: Skyrim" and "Saints Row: The Third". Children and teenagers are currently watching television shows such as "Dora the Explorer", "The Fairly OddParents", "Good Luck Charlie" and "Doc McStuffins".

If you're a kid or a teenager, then you're probably playing with toys such as "Xbox 360", "PlayStation 3" and "The LeapPad Explorer".

Who was the Prime Minister of the United Kingdom on June 29th, 2012?

Looking for some nostalgia? Here are some Youtube videos relating to June 29th, 2012. Please note that videos are automatically selected by Youtube and that results may vary! Click on the "Load Next Video" button to view the next video in the search playlist. In many cases, you'll find episodes of old TV shows, documentaries, music videos and soap dramas.