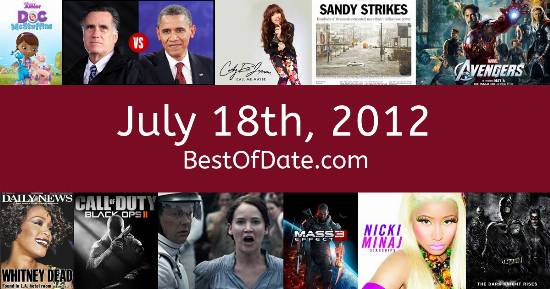 Songs that were on top of the music singles charts in the USA and the United Kingdom on July 18th, 2012.

The date is July 18th, 2012 and it's a Wednesday. Anyone born today will have the star sign Cancer. It's summer, so the temperatures are warmer and the evenings are longer than usual.

In America, the song Call Me Maybe by Carly Rae Jepsen is on top of the singles charts. Over in the UK, Spectrum by Florence and the Machine is the number one hit song. Barack Obama is currently the President of the United States and the movie Ice Age: Continental Drift is at the top of the Box Office.

It's 2012, so the music charts are being dominated by artists such as Carly Rae Jepsen, Gotye, Flo Rida, LMFAO and Ellie Goulding. Meanwhile, a new photo-sharing app called Instagram is currently surging in popularity. The hit song "Call Me Maybe" by Carly Rae Jepsen is currently the subject of a number of parody and lip dub videos.

"Confession Bear" has become the latest Internet meme. Chelsea soccer star John Terry has been found not guilty of racially abusing QPR defender Anton Ferdinand. A video of Australian hurdler Michelle Jenneke performing a warm-up dance before a race is being shared around online.

In music news, a new song called "Gangnam Style" by South Korean singer Psy is currently going viral at the moment. If you were to travel back to this day, notable figures such as Sherman Hemsley, Neil Armstrong, Michael Clarke Duncan and Johnny Lewis would all be still alive. On TV, people are watching popular shows such as "Breaking Bad", "Modern Family", "American Horror Story" and "Once Upon a Time".

Meanwhile, gamers are playing titles such as "Call of Duty: Modern Warfare 3", "The Elder Scrolls V: Skyrim", "Journey" and "Diablo III". Kids and teenagers are watching TV shows such as "Dora the Explorer", "Curious George", "Victorious" and "Austin & Ally". If you're a kid or a teenager, then you're probably playing with toys such as the PlayStation 3, the KidiZoom Camera, the LeapPad Explorer and Skylanders Giants figures.

If you are looking for some childhood nostalgia, then check out July 18th, 2018 instead.

Barack Obama was the President of the United States on July 18th, 2012.

David Cameron was the Prime Minister of the United Kingdom on July 18th, 2012.