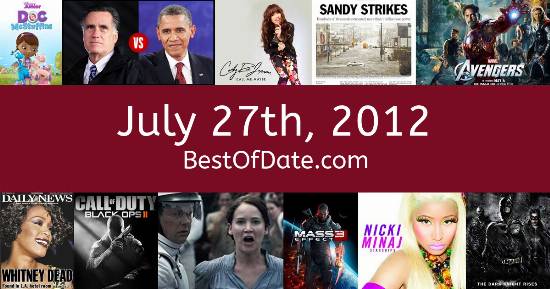 On July 27th, 2012, the following songs were at the top of the music charts in the USA and the UK.

The top "Box Office" movie on this date was the film "Ice Age: Continental Drift".

The following comments about July 27th, 2012 were written by our visitors.

For some reason, I remember browsing Reddit's gaming section and seeing how excited everyone was about the release of StarCraft II. It's hard to believe it's been ten years.
Posted on July 27th, 2022 00:35

I still remember the Opening Ceremonies for the London Olympics on this day and that a stunt double for Queen Elizabeth II jumped out of a plane.
Posted on July 28th, 2022 01:36

The date is July 27th, 2012, and it's a Friday. Anyone born today will have the star sign Leo. Currently, people have "that Friday feeling" and are looking forward to the weekend.

It's summer, so the temperatures are warmer and the evenings are longer than usual. In America, the song Call Me Maybe by Carly Rae Jepsen is on top of the singles charts. Over in the UK, Spectrum by Florence and the Machine is the number one hit song.

Barack Obama is currently the President of the United States, and the movie Ice Age: Continental Drift is at the top of the Box Office. In the United Kingdom, David Cameron is the current Prime Minister. Video rental stores such as Blockbuster are continuing to close their doors at the moment. This is due to the increasing popularity of online streaming services such as Netflix and Hulu.

The hit song "Call Me Maybe" by Carly Rae Jepsen is currently the subject of a number of parody and lip dub videos. "Confession Bear" has become the latest Internet meme. In music news, a new song called "Gangnam Style" by South Korean singer Psy is currently going viral at the moment.

The world is in shock following news that a gunman has killed 12 people at a movie theater in Aurora, Colorado. Actress Kristen Stewart is in the news after photographs emerge of her cheating on Robert Pattinson. The 2012 Summer Olympics are currently taking place in London.

The much-anticipated video game "StarCraft II: Wings of Liberty" has just been released by Blizzard Entertainment. If you were to travel back to this day, notable figures such as Neil Armstrong, Michael Clarke Duncan, Johnny Lewis and Aaron Swartz would all be still alive. On TV, people are watching popular shows such as "Skins", "Mad Men", "Sons of Anarchy" and "Once Upon a Time".

Meanwhile, gamers are playing titles such as "Gears of War 3", "The Elder Scrolls V: Skyrim", "Journey" and "Diablo III". Kids and teenagers are watching TV shows such as "Ben 10", "Mickey Mouse Clubhouse", "Phineas and Ferb" and "Austin & Ally". Popular toys at the moment include the likes of the Xbox 360, the KidiZoom Camera, the LeapPad Explorer and Skylanders Giants figures.

These are trending news stories and fads that were prevalent at this time. These are topics that would have been in the media on July 27th, 2012.

News stories and other events that happened around July 27th, 2012.

Check out our personality summary for people who were born on July 27th, 2012.

Television shows that people were watching in July, 2012.

Popular video games that people were playing in July of 2012.

If you are looking for some childhood nostalgia, then you should check out July 27th, 2018 instead.

Barack Obama was the President of the United States on July 27th, 2012.

David Cameron was the Prime Minister of the United Kingdom on July 27th, 2012.

Find out what your age was on July 27th, 2012, by entering your DOB below.
This information is not saved on our server.