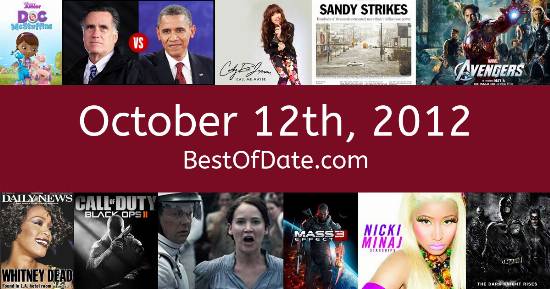 Songs that were on top of the music singles charts in the USA and the United Kingdom on October 12th, 2012:

The date is October 12th, 2012 and it's a Friday. Anyone born today will have the star sign Libra. Currently, people have "that Friday feeling" and are looking forward to the weekend.

The summer is long gone. Temperatures have started to become much cooler and the evenings are beginning to get darker. Fallen leaves have carpeted driveways, lawns, pathways and sidewalks and there's a fresh earthy scent in the ear. In America, the song One More Night by Maroon 5 is on top of the singles charts.

Over in the UK, Diamonds by Rihanna is the number one hit song. Barack Obama is currently the President of the United States and the movie Taken 2 is at the top of the Box Office. In the United Kingdom, David Cameron is the current Prime Minister.

It's 2012, so the music charts are being dominated by artists such as Carly Rae Jepsen, Gotye, Flo Rida, LMFAO and Ellie Goulding. The run-up to the 2012 United States presidential election is currently taking place, as President Barack Obama goes up against Republican nominee Mitt Romney. A new dating app called Tinder has just been released.

In Wales, authorities are searching for a 5-year-old girl called April Jones, who disappeared after getting into a vehicle near her home in Machynlleth, Powys. Gawker has just unmasked a Reddit "troll" called Violentacrez as Michael Brutsch. People are watching popular TV shows such as "Two and a Half Men", "Breaking Bad", "Modern Family" and "Suits".

Meanwhile, gamers are playing titles such as "Battlefield 3", "Saints Row: The Third", "Diablo III" and "Borderlands 2". Kids and teenagers are watching TV shows such as "The Fairly OddParents", "Ben 10", "Glee" and "Good Luck Charlie". If you're a kid or a teenager, then you're probably playing with toys such as "Xbox 360", "PlayStation 3" and "The LeapPad Explorer".

Celebrities, historical figures and noteable people that were born on the 12th of October:

Who was the Prime Minister of the United Kingdom on October 12th, 2012?

Enter your date of birth below to find out how old you were on October 12th, 2012.

Looking for some nostalgia? Here are some Youtube videos relating to October 12th, 2012. Please note that videos are automatically selected by Youtube and that results may vary! Click on the "Load Next Video" button to view the next video in the search playlist. In many cases, you'll find episodes of old TV shows, documentaries, music videos and soap dramas.

Here are some fun statistics about October 12th, 2012.