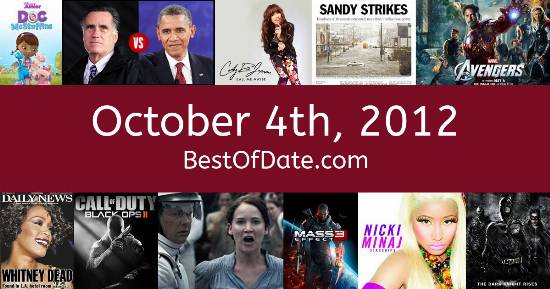 Songs that were on top of the music singles charts in the USA and the United Kingdom on October 4th, 2012.

The movie "Hotel Transylvania" was at the top of the Box Office on October 4th, 2012.

The date is October 4th, 2012, and it's a Thursday. Anyone born today will have the star sign Libra. The summer is long gone. Temperatures have started to become much cooler and the evenings are beginning to get darker.

Fallen leaves have carpeted driveways, lawns, pathways and sidewalks and there's a fresh earthy scent in the ear. In America, the song One More Night by Maroon 5 is on top of the singles charts. Over in the UK, Gangnam Style by Psy is the number one hit song.

Barack Obama is currently the President of the United States, and the movie Hotel Transylvania is at the top of the Box Office. In the United Kingdom, David Cameron is the current Prime Minister. Video rental stores such as Blockbuster are continuing to close their doors at the moment. This is due to the increasing popularity of online streaming services such as Netflix and Hulu.

It's 2012, so the music charts are being dominated by artists such as Carly Rae Jepsen, Gotye, Flo Rida, LMFAO and Ellie Goulding. The run-up to the 2012 United States presidential election is currently taking place, as President Barack Obama goes up against Republican nominee Mitt Romney. A new dating app called Tinder has just been released.

In Wales, authorities are searching for a 5-year-old girl called April Jones, who disappeared after getting into a vehicle near her home in Machynlleth, Powys. American blog Gawker has just released a sex tape of wrestling star Hulk Hogan and Heather Clem. If you were to travel back to this day, notable figures such as Aaron Swartz, Robert F. Chew, Chris Kyle and Reeva Steenkamp would all be still alive.

On TV, people are watching popular shows such as "Grey's Anatomy", "Game of Thrones", "Once Upon a Time" and "Black Mirror". Meanwhile, gamers are playing titles such as "Battlefield 3", "Saints Row: The Third", "Clash of Clans" and "Guild Wars 2". Children and teenagers are currently watching television shows such as "Mickey Mouse Clubhouse", "Horrid Henry", "Jake and the Never Land Pirates" and "Jessie".

These are trending news stories and fads that were prevalent at this time. These are topics that would have been in the media on October 4th, 2012.

Check out our personality summary for people who were born on October 4th, 2012.

Television shows that people were watching in October, 2012.

Popular video games that people were playing in October of 2012.

If you are looking for some childhood nostalgia, then you should check out October 4th, 2018 instead.

Barack Obama was the President of the United States on October 4th, 2012.

David Cameron was the Prime Minister of the United Kingdom on October 4th, 2012.

Enter your date of birth below to find out how old you were on October 4th, 2012.
This information is not transmitted to our server.

Here are some fun statistics about October 4th, 2012.