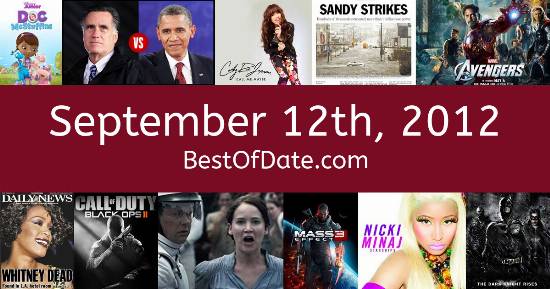 September 12th, 2012 relates to an event in a movie, book, game or television series:

Songs that were on top of the music singles charts in the USA and the United Kingdom on September 12th, 2012:

The date is September 12th, 2012 and it's a Wednesday. Anyone born today will have the star sign Virgo. Schools have started back and autumn has arrived, so temperatures have started to cool and trees are beginning to shed their leaves.

In America, the song Whistle by Flo Rida is on top of the singles charts. Over in the UK, Let Me Love You by Ne-Yo is the number one hit song. Barack Obama is currently the President of the United States and the movie The Possession is at the top of the Box Office.

An app called Instagram is currently surging in popularity. A song called "Gangnam Style" by South Koeran singer Psy is currently going viral at the moment. The run-up to the 2012 United States presidential election is currently taking place, as President Barack Obama goes up against Republican nominee Mitt Romney.

The music video "We Found Love", by Rihanna featuring Calvin Harris, has just won "Video of the Year" at the 2012 MTV VMA awards. U.S. Ambassador J. Christopher Stevens and others have been killed following an attack on the U.S. embassy in Benghazi, Libya. An anti-Islam film called the "Innocence of Muslims" is currently causing controversy. As a result, anti-American protests have sprung up in several countries around the middle east.

A new dating app called Tinder has just been released. On TV, people are watching popular shows such as "Futurama", "CSI: NY", "The Office" and "American Horror Story". Meanwhile, gamers are playing titles such as "Gears of War 3", "Saints Row: The Third", "DayZ (mod)" and "Diablo III".

Kids and teenagers are watching TV shows such as "Glee", "Jessie", "Austin & Ally" and "Doc McStuffins". If you're a kid or a teenager, then you're probably playing with toys such as "Xbox 360", "PlayStation 3" and "The LeapPad Explorer".

Who was the Prime Minister of the United Kingdom on September 12th, 2012?

Enter your date of birth below to find out how old you were on September 12th, 2012.

Looking for some nostalgia? Here are some Youtube videos relating to September 12th, 2012. Please note that videos are automatically selected by Youtube and that results may vary! Click on the "Load Next Video" button to view the next video in the search playlist. In many cases, you'll find episodes of old TV shows, documentaries, music videos and soap dramas.

Here are some fun statistics about September 12th, 2012.