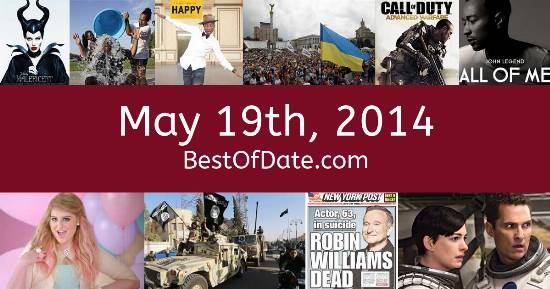 Songs that were on top of the music singles charts in the USA and the United Kingdom on May 19th, 2014.

The date is May 19th, 2014 and it's a Monday. Anyone born today will have the star sign Taurus. The summer of 2014 has finally arrived. The weather has warmed up and the evenings are brighter than usual.

In America, the song All of Me by John Legend is on top of the singles charts. Over in the UK, Waves by Mr Probz is the number one hit song. Barack Obama is currently the President of the United States and the movie Godzilla is at the top of the Box Office.

It is 2014, so the music charts are being dominated by artists such as Pharrell Williams, Katy Perry, John Legend, Iggy Azalea, Meghan Trainor, Lorde and Jason Derulo. A new Internet slang phrase called "Sliding into your DMs" is becoming popular at the moment. The trial of Australian entertainer Rolf Harris for indecent assault is currently underway in England.

The phrase "You the real MVP" is becoming popular online following Kevin Durant's heartfelt acceptance speech for the NBA's Most Valuable Player Award. CCTV footage has recently emerged of Beyonce's sister Solange Knowles attacking her brother-in-law Jay-Z in an elevator at a hotel in New York City. Social media users are currently speculating about the reasons behind the fight. In soccer, Arsenal have just ended their nine year trophy drought after beating Hull City 3-2 and winning the FA Cup. Meanwhile, Manchester United have just announced Dutch coach Louis van Gaal as their new manager.

If you were to travel back to this day, notable figures such as Robin Williams, Richard Attenborough, Joan Rivers and Simone Battle would all be still alive. On TV, people are watching popular shows such as "The Big Bang Theory", "Community", "Boardwalk Empire" and "Game of Thrones". Meanwhile, gamers are playing titles such as "Pokémon X and Y", "Call of Duty: Ghosts", "Rust" and "Hearthstone: Heroes of Warcraft".

Children and teenagers are currently watching television shows such as "The Fairly OddParents", "Curious George", "Dog with a Blog" and "The Thundermans". Popular toys at the moment include the likes of the Wii U, Rainbow Loom, the PlayStation 4 and the Xbox One.

Notable events that occurred around May 19th, 2014.

If you are looking for some childhood nostalgia, then check out May 19th, 2020 instead.

Historical weather information for May 19th, 2014.

Barack Obama was the President of the United States on May 19th, 2014.

David Cameron was the Prime Minister of the United Kingdom on May 19th, 2014.