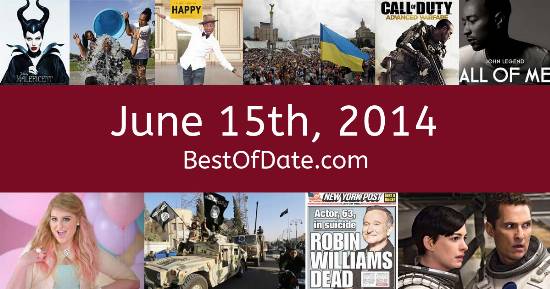 Songs that were on top of the music singles charts in the USA and the United Kingdom on June 15th, 2014.

The date is June 15th, 2014 and it's a Sunday. Anyone born today will have the star sign Gemini. Currently, people are enjoying their weekend.

It's summer, so the temperatures are warmer and the evenings are longer than usual. In America, the song Fancy by Iggy Azalea featuring Charli XCX is on top of the singles charts. Over in the UK, Sing by Ed Sheeran is the number one hit song.

Barack Obama is currently the President of the United States and the movie 22 Jump Street is at the top of the Box Office. In the United Kingdom, David Cameron is the current Prime Minister. Video rental stores such as Blockbuster are continuing to close their doors at the moment. This is due to the increasing popularity of online streaming services such as Netflix and Hulu.

A social networking website called Vine is extremely popular at the moment. It is 2014, so the music charts are being dominated by artists such as Pharrell Williams, Katy Perry, John Legend, Iggy Azalea, Meghan Trainor, Lorde and Jason Derulo. The trial of Australian entertainer Rolf Harris for indecent assault is currently underway in England.

An Islamic militant group called ISIS is beginning to seize large amounts territory in northern Iraq. The media is currently reporting that the group has seized control of Mosul, which is the second most populated city in Iraq. The 2014 FIFA World Cup is currently taking place in Brazil. Meanwhile, Chelsea have just sold defender David Luiz to Paris Saint-Germain for £50 million.

The San Antonio Spurs have just won the 2014 NBA Finals by defeating the Miami Heat by 4-1. If you were to travel back to this day, notable figures such as Robin Williams, Richard Attenborough, Joan Rivers and Simone Battle would all be still alive. On TV, people are watching popular shows such as "Prison Break", "White Collar", "Game of Thrones" and "Once Upon a Time".

Meanwhile, gamers are playing titles such as "Saints Row IV", "Call of Duty: Ghosts", "Rust" and "Flappy Bird". Kids and teenagers are watching TV shows such as "Horrid Henry", "Doc McStuffins", "Agents of S.H.I.E.L.D." and "Sheriff Callie's Wild West". If you're a kid or a teenager, then you're probably playing with toys such as Rainbow Loom, the Furby Boom, the Xbox One and Frozen dolls.

If you are looking for some childhood nostalgia, then check out June 15th, 2020 instead.

Barack Obama was the President of the United States on June 15th, 2014.

David Cameron was the Prime Minister of the United Kingdom on June 15th, 2014.