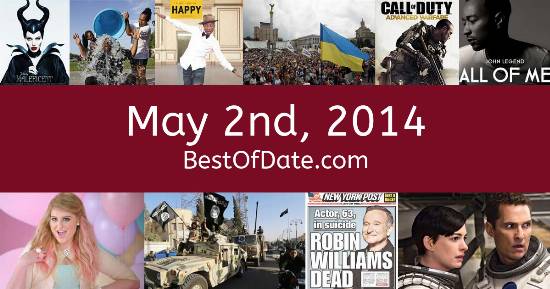 Songs that were on top of the music singles charts in the USA and the United Kingdom on May 2nd, 2014:

The date is May 2nd, 2014 and it's a Friday. Anyone born today will have the star sign Taurus. Currently, people have "that Friday feeling" and are looking forward to the weekend.

The summer of 2014 has finally arrived. The weather has warmed up and the evenings are brighter than usual. In America, the song Happy by Pharrell Williams is on top of the singles charts. Over in the UK, Hideaway by Kiesza is the number one hit song.

Barack Obama is currently the President of the United States and the movie The Amazing Spider-Man 2 is at the top of the Box Office. In the United Kingdom, David Cameron is the current Prime Minister. A social networking website called Vine is extremely popular at the moment.

It is 2014, so the music charts are being dominated by artists such as Pharrell Williams, Katy Perry, John Legend, Iggy Azalea, Meghan Trainor, Lorde and Jason Derulo. A new Internet slang phrase called "Sliding into your DMs" is becoming popular at the moment. Memes are currently being made about Liverpool captain Steven Gerrard, who recently slipped during an important game against Chelsea, which gave them the opportunity score.

US President Barack Obama has placed economic sanctions on Russia following its recent annexation of Crimea. Tributes are pouring in for English actor Bob Hoskins, who recently passed away at the age of 71. On TV, people are watching popular shows such as "The Walking Dead", "Game of Thrones", "American Horror Story" and "Rick and Morty".

Meanwhile, gamers are playing titles such as "ARMA 3", "Grand Theft Auto V", "Rust" and "DayZ". Children and teenagers are currently watching television shows such as "LazyTown", "Glee", "Team Umizoomi" and "Jessie". If you're a kid or a teenager, then you're probably playing with toys such as "The Wii U", "PlayStation 4", "Xbox One" and "Frozen dolls".

Notable events that occurred around May 2nd, 2014:

Who was the Prime Minister of the United Kingdom on May 2nd, 2014?

Enter your date of birth below to find out how old you were on May 2nd, 2014.

Looking for some nostalgia? Here are some Youtube videos relating to May 2nd, 2014. Please note that videos are automatically selected by Youtube and that results may vary! Click on the "Load Next Video" button to view the next video in the search playlist. In many cases, you'll find episodes of old TV shows, documentaries, music videos and soap dramas.