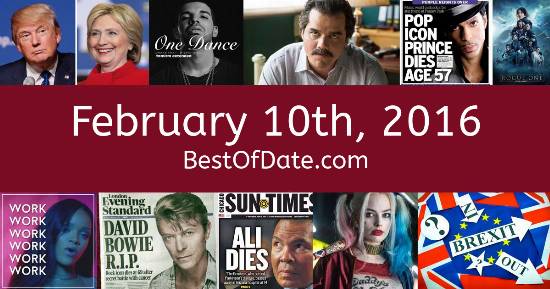 Songs that were on top of the music singles charts in the USA and the United Kingdom on February 10th, 2016:

The date is February 10th, 2016 and it's a Wednesday. Anyone born today will have the star sign Aquarius. Valentine's Day is just around the corner.

In America, the song Sorry by Justin Bieber is on top of the singles charts. Over in the UK, Stitches by Shawn Mendes is the number one hit song. Barack Obama is currently the President of the United States and the movie Kung Fu Panda 3 is at the top of the Box Office.

In the United Kingdom, David Cameron is the current Prime Minister. It's 2016, so the music charts are being dominated by artists such as Drake, Lukas Graham, Sia, Mike Posner, The Chainsmokers and Calvin Harris. The World Health Organization has announced that there is currently an outbreak of the Zika virus.

UFC fans are excited about the upcoming fight between Nate Diaz and Conor McGregor at UFC 196. This will be the first fight between the pair. The 2016 primaries for the Democratic Party and the Republican Party have started as both sides fight it out to choose their nominee for the upcoming presidential election. In Ireland, the campaign for the 2016 Irish general election is taking place. The ruling parties Fine Gael and Labour are hoping to regain power.

The long-awaited game "XCOM 2" has finally been released. The Denver Broncos have won the Super Bowl after defeating the Carolina Panthers. On TV, people are watching popular shows such as "Prison Break", "House of Cards", "Power" and "Making a Murderer".

Meanwhile, gamers are playing titles such as "Rocket League", "Star Wars Battlefront", "XCOM 2" and "Firewatch". Children and teenagers are currently watching television shows such as "The Fairly OddParents", "Jake and the Never Land Pirates", "Paw Patrol" and "Nicky, Ricky, Dicky & Dawn". If you're a kid or a teenager, then you're probably playing with toys such as "PlayStation 4", "Xbox One" and "Star Wars BB-8 toy droid".

Who was the Prime Minister of the United Kingdom on February 10th, 2016?

Enter your date of birth below to find out how old you were on February 10th, 2016.

Looking for some nostalgia? Here are some Youtube videos relating to February 10th, 2016. Please note that videos are automatically selected by Youtube and that results may vary! Click on the "Load Next Video" button to view the next video in the search playlist. In many cases, you'll find episodes of old TV shows, documentaries, music videos and soap dramas.

Here are some fun statistics about February 10th, 2016.