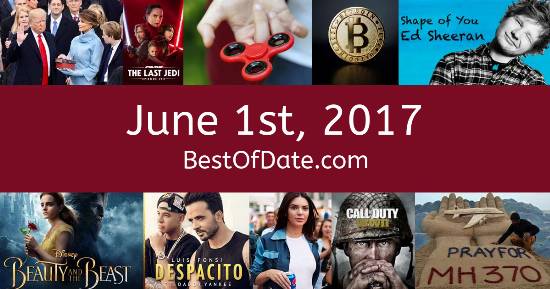 Songs that were on top of the music singles charts in the USA and the United Kingdom on June 1st, 2017.

The movie "Pirates of the Caribbean: Dead Men Tell No Tales" was at the top of the box office on June 1st, 2017.

The date is June 1st, 2017 and it's a Thursday. Anyone born today will have the star sign Gemini. It's summer, so the temperatures are warmer and the evenings are longer than usual.

The song Despacito (Remix) by Luis Fonsi and Daddy Yankee is on top of the singles charts in both the USA and the United Kingdom. Donald Trump is currently the President of the United States and the movie Pirates of the Caribbean: Dead Men Tell No Tales is at the top of the Box Office. In the United Kingdom, Theresa May is the current Prime Minister.

It's 2017, so the music charts are being dominated by artists such as Ed Sheeran, Luis Fonsi, Bruno Mars, Kendrick Lamar, The Chainsmokers, Migos, Sam Hunt and Post Malone. A toy called the "fidget spinner" is becoming a worldwide sensation. A new meme called "Mocking Spongebob" iS cUrReNtLy GoInG vIrAl.

The campaign for the 2017 United Kingdom general election is currently underway, as UK Prime Minister Theresa May hopes to secure a larger majority. Former Panama ruler Manuel Noriega has passed away at the age of 83 following a brain hemorrhage. Comedian Kathy Griffin has sparked controversy by uploading a video of herself holding a fake severed head that resembles Donald Trump.

On Twitter, Donald Trump has recently posted a half-finished tweet that uses the word "covfefe" instead of "coverage". This mistake has led to the creation of hundreds of Internet memes. A meme called "The Floor Is..." is going viral at the moment. The United States is currently facing criticism following its decision to withdraw from the Paris Climate Agreement.

If you were to travel back to this day, notable figures such as Adam West, Prodigy, Stevie Ryan and Chester Bennington would all be still alive. On TV, people are watching popular shows such as "RuPaul's Drag Race", "Game of Thrones", "Jane the Virgin" and "13 Reasons Why". Meanwhile, gamers are playing titles such as "PlayerUnknown's Battlegrounds", "Mafia III", "The Legend of Zelda: Breath of the Wild" and "What Remains of Edith Finch".

Children and teenagers are currently watching television shows such as "Doc McStuffins", "Nicky, Ricky, Dicky & Dawn", "Game Shakers" and "The Loud House". Popular toys at the moment include the likes of the Xbox One, Hatchimals, the Nintendo Switch and FurReal Roarin' Tyler.

Donald Trump was the President of the United States on June 1st, 2017.

Theresa May was the Prime Minister of the United Kingdom on June 1st, 2017.

Enter your date of birth below to find out how old you were on June 1st, 2017.

Here are some fun statistics about June 1st, 2017.