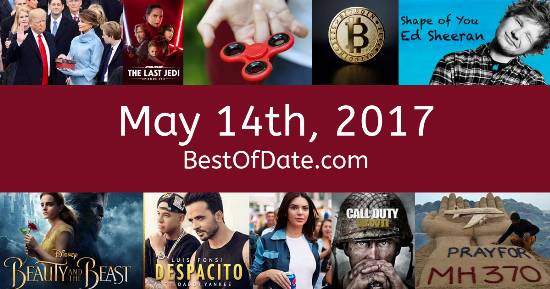 These songs were on top of the music charts in the United States and the United Kingdom on May 14th, 2017.

The movie "Guardians of the Galaxy Vol. 2" was at the top of the Box Office on this day.

The date is May 14th, 2017, and it's a Sunday. Anyone born today will have the star sign Taurus. Currently, people are enjoying their weekend.

The summer of 2017 has finally arrived. The weather has warmed up and the evenings are brighter than usual. In America, the song That's What I Like by Bruno Mars is on top of the singles charts. Over in the UK, I'm the One by DJ Khaled is the number one hit song.

Donald Trump is currently the President of the United States, and the movie Guardians of the Galaxy Vol. 2 is at the top of the Box Office. In the United Kingdom, Theresa May is the current Prime Minister. It's 2017, so the music charts are being dominated by artists such as Ed Sheeran, Luis Fonsi, Bruno Mars, Kendrick Lamar, The Chainsmokers, Migos, Sam Hunt and Post Malone.

Meanwhile, in England, Italian manager Antonio Conte has led Chelsea to their sixth league title. A large-scale ransomware cyberattack called "the WannaCry ransomware attack" is affecting over 150 countries around the world. If you were to travel back to this day, notable figures such as Chris Cornell, Roger Moore, Adam West and Prodigy would all be still alive.

On TV, people are watching popular shows such as "Game of Thrones", "Black Mirror", "Orange Is the New Black" and "Gotham". Meanwhile, gamers are playing titles such as "Cities: Skylines", "PlayerUnknown's Battlegrounds", "Mafia III" and "What Remains of Edith Finch". Kids and teenagers are watching TV shows such as "Horrid Henry", "Doc McStuffins", "Agents of S.H.I.E.L.D." and "Nicky, Ricky, Dicky & Dawn".

Popular toys at the moment include the likes of the PlayStation 4, the Xbox One, Hatchimals and the Nintendo Switch.

These are trending news stories and fads that were prevalent at this time. These are topics that would have been in the media on May 14th, 2017.

Check out our personality summary for people who were born on May 14th, 2017.

Television shows that people were watching in May, 2017.

Popular video games that people were playing in May of 2017.

Donald Trump was the President of the United States on May 14th, 2017.

Theresa May was the Prime Minister of the United Kingdom on May 14th, 2017.

Enter your date of birth below to find out how old you were on May 14th, 2017.
This information is not transmitted to our server.