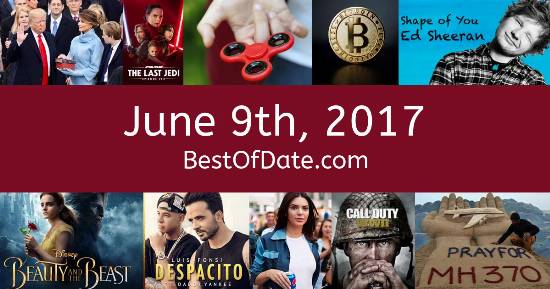 Songs that were on top of the music singles charts in the USA and the United Kingdom on June 9th, 2017.

The date is June 9th, 2017 and it's a Friday. Anyone born today will have the star sign Gemini. Currently, people have "that Friday feeling" and are looking forward to the weekend.

It's summer, so the temperatures are warmer and the evenings are longer than usual. The song Despacito (Remix) by Luis Fonsi and Daddy Yankee is on top of the singles charts in both the USA and the United Kingdom. Donald Trump is currently the President of the United States and the movie Wonder Woman is at the top of the Box Office.

A new meme called "Mocking Spongebob" iS cUrReNtLy GoInG vIrAl. Comedian Kathy Griffin has sparked controversy by uploading a video of herself holding a fake severed head that resembles Donald Trump. On Twitter, Donald Trump has recently posted a half-finished tweet that uses the word "covfefe" instead of "coverage". This mistake has led to the creation of hundreds of Internet memes.

A meme called "The Floor Is..." is going viral at the moment. The United States is currently facing criticism following its decision to withdraw from the Paris Climate Agreement. Eight people have died following an Islamic terrorist attack on London Bridge. The attackers drove their van into pedestrians before crashing and jumping out to stab people at the Borough Market area.

UK Prime Minister Theresa May's decision to hold a Snap Election has backfired, as her party have lost 13 seats in the 2017 United Kingdom general election. If you were to travel back to this day, notable figures such as Adam West, Prodigy, Stevie Ryan and Chester Bennington would all be still alive. On TV, people are watching popular shows such as "Suits", "Once Upon a Time", "Jane the Virgin" and "13 Reasons Why".

Meanwhile, gamers are playing titles such as "Cities: Skylines", "Horizon Zero Dawn", "The Legend of Zelda: Breath of the Wild" and "What Remains of Edith Finch". Children and teenagers are currently watching television shows such as "Horrid Henry", "Doc McStuffins", "Agents of S.H.I.E.L.D." and "Bunnicula". If you're a kid or a teenager, then you're probably playing with toys such as the PlayStation 4, the Xbox One, L.O.L. Surprise! and the Nintendo Switch.

Donald Trump was the President of the United States on June 9th, 2017.

Theresa May was the Prime Minister of the United Kingdom on June 9th, 2017.

Enter your date of birth below to find out how old you were on June 9th, 2017.

Here are some fun statistics about June 9th, 2017.