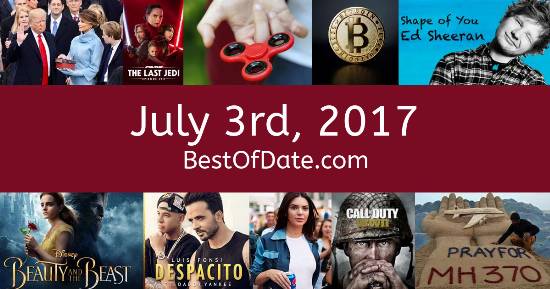 Songs that were on top of the music singles charts in the USA and the United Kingdom on July 3rd, 2017.

The date is July 3rd, 2017 and it's a Monday. Anyone born today will have the star sign Cancer. In America, the July 4th celebrations are fast approaching.

It's summer, so the temperatures are warmer and the evenings are longer than usual. In America, the song Despacito (Remix) by Luis Fonsi and Daddy Yankee is on top of the singles charts. Over in the UK, Bridge over Troubled Water by Artists for Grenfell is the number one hit song.

Donald Trump is currently the President of the United States and the movie Despicable Me 3 is at the top of the Box Office. In the United Kingdom, Theresa May is the current Prime Minister. It's 2017, so the music charts are being dominated by artists such as Ed Sheeran, Luis Fonsi, Bruno Mars, Kendrick Lamar, The Chainsmokers, Migos, Sam Hunt and Post Malone.

A toy called the "fidget spinner" is becoming a worldwide sensation. A meme called "The Floor Is..." is going viral at the moment. The app Snapchat has recently released its new "Snap Map" feature.

Snapchat's new "Dancing Hotdog" filter has become the butt of several online jokes. If you were to travel back to this day, notable figures such as Chester Bennington, John Heard, Frank Vincent and Greg Antonacci would all be still alive. On TV, people are watching popular shows such as "RuPaul's Drag Race", "Game of Thrones", "Black Mirror" and "Peaky Blinders".

Meanwhile, gamers are playing titles such as "Cities: Skylines", "PlayerUnknown's Battlegrounds", "Mafia III" and "Crash Bandicoot N. Sane Trilogy". Kids and teenagers are watching TV shows such as "Henry Danger", "Game Shakers", "Bunnicula" and "The Loud House". If you're a kid or a teenager, then you're probably playing with toys such as the Xbox One, Hatchimals, Fidget spinners and the Nintendo Switch.

Donald Trump was the President of the United States on July 3rd, 2017.

Theresa May was the Prime Minister of the United Kingdom on July 3rd, 2017.

Enter your date of birth below to find out how old you were on July 3rd, 2017.

Here are some fun statistics about July 3rd, 2017.