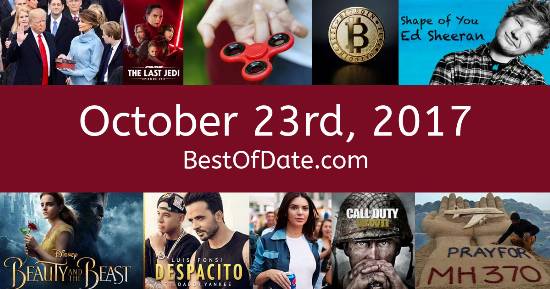 Songs that were on top of the music singles charts in the USA and the United Kingdom on October 23rd, 2017:

The date is October 23rd, 2017 and it's a Monday. Anyone born today will have the star sign Scorpio. The summer is long gone. Temperatures have started to become much cooler and the evenings are beginning to get darker.

Fallen leaves have carpeted driveways, lawns, pathways and sidewalks and there's a fresh earthy scent in the ear. Halloween of 2017 is quickly approaching and stores are selling costumes and decorations. In America, the song Bodak Yellow by Cardi B is on top of the singles charts.

Over in the UK, Rockstar by Post Malone is the number one hit song. Donald Trump is currently the President of the United States and the movie Boo 2! A Madea Halloween is at the top of the Box Office. In the United Kingdom, Theresa May is the current Prime Minister.

An Internet meme called "Distracted Boyfriend" is currently going viral. The comedy song "Man's Not Hot" by Big Shaq has become an Internet sensation. The first season of Mindhunter has just been released on Netflix.

The Me Too movement has recently kicked off on Twitter and people are publicizing their sexual abuse allegations against prominent men in the entertainment industry. A film called "Only the Brave", which tells the story of the Granite Mountain Hotshots, is currently being shown in movie theaters. People are watching popular TV shows such as "RuPaul's Drag Race", "Peaky Blinders", "Jane the Virgin" and "Stranger Things".

Meanwhile, gamers are playing titles such as "Horizon Zero Dawn", "What Remains of Edith Finch", "Crash Bandicoot N. Sane Trilogy" and "Destiny 2". Kids and teenagers are watching TV shows such as "Dora the Explorer", "Doc McStuffins", "Henry Danger" and "Nicky, Ricky, Dicky & Dawn". If you're a kid or a teenager, then you're probably playing with toys such as "PlayStation 4", "Xbox One", "Hatchimals" and "Nintendo Switch".

Celebrities and historical figures that were born on the 23rd of October:

Who was the Prime Minister of the United Kingdom on October 23rd, 2017?

Enter your date of birth below to find out how old you were on October 23rd, 2017.

Looking for some nostalgia? Here are some Youtube videos relating to October 23rd, 2017. Please note that videos are automatically selected by Youtube and that results may vary! Click on the "Load Next Video" button to view the next video in the search playlist. In many cases, you'll find episodes of old TV shows, documentaries, music videos and soap dramas.

Here are some fun statistics about October 23rd, 2017.