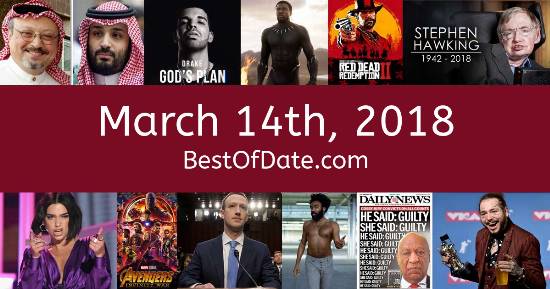 Songs that were on top of the music singles charts in the USA and the United Kingdom on March 14th, 2018.

The date is March 14th, 2018 and it's a Wednesday. Anyone born today will have the star sign Pisces. Spring has started to creep in and the days are beginning to get longer.

St. Patrick's Day is just around the corner. The song God's Plan by Drake is on top of the singles charts in both the USA and the United Kingdom. Donald Trump is currently the President of the United States and the movie Black Panther is at the top of the Box Office.

In the United Kingdom, Theresa May is the current Prime Minister. It's 2018, so the music charts are being dominated by artists such as Drake, Ed Sheeran, Camila Cabello, Post Malone, Cardi B, Juice Wrld and Dua Lipa. If you were to travel back to this day, notable figures such as Stephen Hawking, Barbara Bush, Avicii and Verne Troyer would all be still alive.

On TV, people are watching popular shows such as "The Big Bang Theory", "The Walking Dead", "Black Mirror" and "Mindhunter". Meanwhile, gamers are playing titles such as "What Remains of Edith Finch", "Fortnite", "Wolfenstein II: The New Colossus" and "Super Mario Odyssey". Children and teenagers are currently watching television shows such as "Henry Danger", "Nicky, Ricky, Dicky & Dawn", "Game Shakers" and "The Loud House".

Popular toys at the moment include the likes of the Nintendo Switch, FurReal Roarin' Tyler, the Star Wars Droid Inventor Kit and the Paw Patrol Lookout Tower Playset.

Donald Trump was the President of the United States on March 14th, 2018.

Theresa May was the Prime Minister of the United Kingdom on March 14th, 2018.

Enter your date of birth below to find out how old you were on March 14th, 2018.