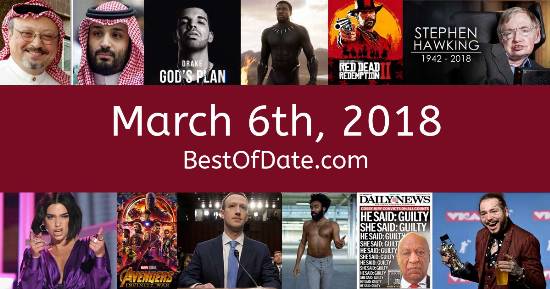 Songs that were on top of the music singles charts in the USA and the United Kingdom on March 6th, 2018.

The date is March 6th, 2018 and it's a Tuesday. Anyone born today will have the star sign Pisces. Spring has started to creep in and the days are beginning to get longer.

It's 2018, so the music charts are being dominated by artists such as Drake, Ed Sheeran, Camila Cabello, Post Malone, Cardi B, Juice Wrld and Dua Lipa. If you were to travel back to this day, notable figures such as Stephen Hawking, Barbara Bush, Avicii and Verne Troyer would all be still alive. On TV, people are watching popular shows such as "Grey's Anatomy", "Modern Family", "Black Mirror" and "Jane the Virgin".

Meanwhile, gamers are playing titles such as "What Remains of Edith Finch", "Ark: Survival Evolved", "Wolfenstein II: The New Colossus" and "Star Wars Battlefront II". Children and teenagers are currently watching television shows such as "Doc McStuffins", "Paw Patrol", "The Thundermans" and "The Loud House". If you're a kid or a teenager, then you're probably playing with toys such as the PlayStation 4, the Xbox One, L.O.L. Surprise! and the Paw Patrol Lookout Tower Playset.

Donald Trump was the President of the United States on March 6th, 2018.

Theresa May was the Prime Minister of the United Kingdom on March 6th, 2018.

Enter your date of birth below to find out how old you were on March 6th, 2018.

Here are some fun statistics about March 6th, 2018.