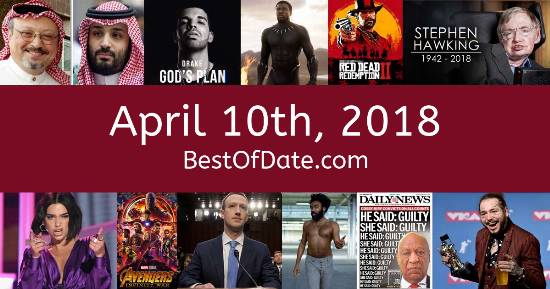 Songs that were on top of the music singles charts in the USA and the United Kingdom on April 10th, 2018.

The date is April 10th, 2018 and it's a Tuesday. Anyone born today will have the star sign Aries. The summer of 2018 is drawing closer and temperatures have started to rise.

In America, the song God's Plan by Drake is on top of the singles charts. Over in the UK, These Days by Rudimental is the number one hit song. Donald Trump is currently the President of the United States and the movie A Quiet Place is at the top of the Box Office.

Popular toys at the moment include the likes of the PlayStation 4, the Nintendo Switch, FurReal Roarin' Tyler and the Paw Patrol Lookout Tower Playset.

Donald Trump was the President of the United States on April 10th, 2018.

Theresa May was the Prime Minister of the United Kingdom on April 10th, 2018.

Enter your date of birth below to find out how old you were on April 10th, 2018.