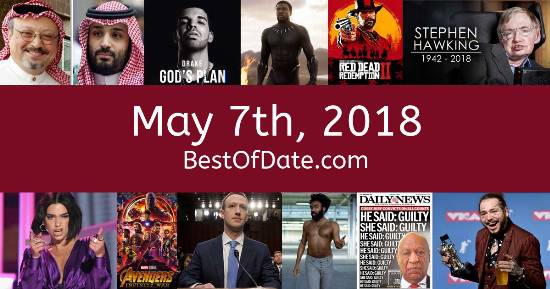 These songs were on top of the music charts in the United States and the United Kingdom on May 7th, 2018.

The date is May 7th, 2018, and it's a Monday. Anyone born today will have the star sign Taurus. The summer of 2018 has finally arrived. The weather has warmed up and the evenings are brighter than usual.

In America, the song Nice for What by Drake is on top of the singles charts. Over in the UK, One Kiss by Calvin Harris and Dua Lipa is the number one hit song. Donald Trump is currently the President of the United States, and the movie Avengers: Infinity War is at the top of the Box Office.

In the United Kingdom, Theresa May is the current Prime Minister. It's 2018, so the music charts are being dominated by artists such as Drake, Ed Sheeran, Camila Cabello, Post Malone, Cardi B, Juice Wrld and Dua Lipa. If you were to travel back to this day, notable figures such as TotalBiscuit, Kate Spade, Anthony Bourdain and XXXTentacion would all be still alive.

On TV, people are watching popular shows such as "The Walking Dead", "Black Mirror", "Orange Is the New Black" and "Stranger Things". Meanwhile, gamers are playing titles such as "What Remains of Edith Finch", "Wolfenstein II: The New Colossus", "Super Mario Odyssey" and "Far Cry 5". Children and teenagers are currently watching television shows such as "Horrid Henry", "Game Shakers", "Bunnicula" and "The Loud House".

If you're a kid or a teenager, then you're probably playing with toys such as the Xbox One, L.O.L. Surprise!, FurReal Roarin' Tyler and the Star Wars Droid Inventor Kit.

These are trending news stories and fads that were prevalent at this time. These are topics that would have been in the media on May 7th, 2018.

News stories and other events that happened around May 7th, 2018.

Check out our personality summary for people who were born on May 7th, 2018.

Television shows that people were watching in May, 2018.

Popular video games that people were playing in May of 2018.

Canadian wrestler. Deceased
Born on May 7th, 1965
He was not alive on this date.

National holidays and famous events that fall on the 7th of May.

Donald Trump was the President of the United States on May 7th, 2018.

Theresa May was the Prime Minister of the United Kingdom on May 7th, 2018.

Find out what your age was on May 7th, 2018, by entering your DOB below.
This information is not saved on our server.