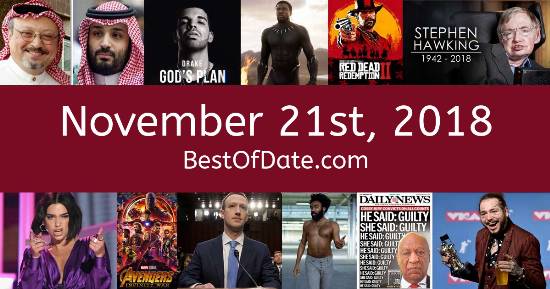 Songs that were on top of the music singles charts in the USA and the United Kingdom on November 21st, 2018.

The movie "Fantastic Beasts: The Crimes of Grindelwald" was at the top of the box office on November 21st, 2018.

The date is November 21st, 2018 and it's a Wednesday. Anyone born today will have the star sign Scorpio. In America, it is the day before Thanksgiven Day and people are looking forward to tomorrow's dinner.

It's November, so the evenings are getting darker and the days are getting colder. The song Thank U, Next by Ariana Grande is on top of the singles charts in both the USA and the United Kingdom. Donald Trump is currently the President of the United States and the movie Fantastic Beasts: The Crimes of Grindelwald is at the top of the Box Office.

In the United Kingdom, Theresa May is the current Prime Minister. It's 2018, so the music charts are being dominated by artists such as Drake, Ed Sheeran, Camila Cabello, Post Malone, Cardi B, Juice Wrld and Dua Lipa. On TV, people are watching popular shows such as "RuPaul's Drag Race", "Modern Family", "Black Mirror" and "Narcos: Mexico".

Meanwhile, gamers are playing titles such as "Fortnite", "God of War", "Spider-Man" and "Red Dead Redemption 2". Kids and teenagers are watching TV shows such as "Dora the Explorer", "Paw Patrol", "Henry Danger" and "Game Shakers". Popular toys at the moment include the likes of the PlayStation 4, the Xbox One and the Nintendo Switch.

A Spotify playlist of hit songs from 2018. Take a trip back to the peak days of Drake, Post Malone, Camila Cabello and Juice WRLD.

Celebrities, historical figures and notable people who were born on the 21st of November.

Donald Trump was the President of the United States on November 21st, 2018.

Theresa May was the Prime Minister of the United Kingdom on November 21st, 2018.

Enter your date of birth below to find out how old you were on November 21st, 2018.

Here are some fun statistics about November 21st, 2018.

Leave a comment and tell everyone why November 21st, 2018 is important to you.