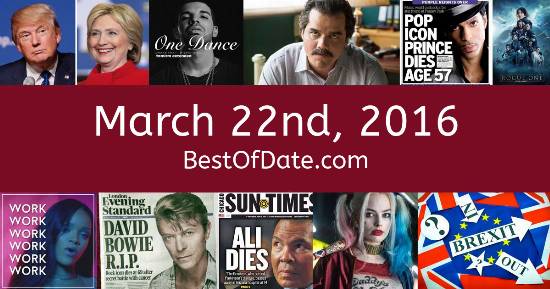 March 22nd, 2016 relates to a fictional event in a movie, book, game or television series.

Songs that were on top of the music singles charts in the USA and the United Kingdom on March 22nd, 2016.

The date is March 22nd, 2016 and it's a Tuesday. Anyone born today will have the star sign Aries. Spring has arrived and the days have become longer.

In America, the song Work by Rihanna featuring Drake is on top of the singles charts. Over in the UK, 7 Years by Lukas Graham is the number one hit song. Barack Obama is currently the President of the United States and the movie Zootopia is at the top of the Box Office.

Tributes are pouring in for British magician Paul Daniels, who has recently passed away after battling a brain tumour. Barack Obama has just visited Cuba, becoming the first US president to do so in 88 years. ISIS has struck the Belgium city of Brussels with three coordinated suicide bombings, leaving 32 people dead. The hashtag #JeSuisBruxelles (#IamBrussels) is currently being used on Twitter to show support. Meanwhile, several famous structures around the world are being illuminated with the colours of the Belgian flag.

Former controversial Toronto Mayor Rob Ford has just passed away at the age of 46 after a battle with cancer. The world of Hip Hop is in mourning following the death of "A Tribe Called Quest" member Phife Dawg due to complications relating to diabetes. If you were to travel back to this day, notable figures such as Rob Ford, Johan Cruyff, Chyna and Prince would all be still alive.

On TV, people are watching popular shows such as "Once Upon a Time", "Orange Is the New Black", "Rick and Morty" and "Better Call Saul". Meanwhile, gamers are playing titles such as "Metal Gear Solid V: The Phantom Pain", "Star Wars Battlefront", "XCOM 2" and "Firewatch". Children and teenagers are currently watching television shows such as "Dora the Explorer", "Jake and the Never Land Pirates", "Sheriff Callie's Wild West" and "Game Shakers".

Barack Obama was the President of the United States on March 22nd, 2016.

David Cameron was the Prime Minister of the United Kingdom on March 22nd, 2016.

Enter your date of birth below to find out how old you were on March 22nd, 2016.