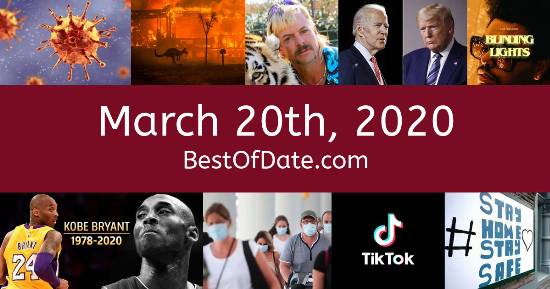 These songs were on top of the music charts in the United States and the United Kingdom on March 20th, 2020.

The top "Box Office" movie on this date was the film "Onward".

The date is March 20th, 2020, and it's a Friday. Anyone born today will have the star sign Pisces. Currently, people have "that Friday feeling" and are looking forward to the weekend.

Spring has arrived and the days have become longer. St. Patrick's Day of 2020 has recently come and gone. In America, the song The Box by Roddy Ricch is on top of the singles charts.

Over in the UK, Blinding Lights by The Weeknd is the number one hit song. Donald Trump is currently the President of the United States, and the movie Onward is at the top of the Box Office. In the United Kingdom, Boris Johnson is the current Prime Minister.

A new respiratory virus called Covid-19 is starting to become a reality for many people in the western world. Countries are going into lockdown and closing their borders. Sports and other events are also being cancelled. In America, several states have issued stay-at-home orders. If you were to travel back to this day, notable figures such as Kenny Rogers, Little Richard, Naya Rivera and Herman Cain would all be still alive. On TV, people are watching popular shows such as "Grey's Anatomy", "The Walking Dead", "Homeland" and "Black-ish".

Meanwhile, gamers are playing titles such as "Call of Duty: Modern Warfare", "Death Stranding" and "Pokémon Sword and Shield". Kids and teenagers are watching TV shows such as "Horrid Henry", "Agents of S.H.I.E.L.D." and "The Loud House". Popular toys at the moment include the likes of the PlayStation 4 and the Xbox One.

These are trending news stories and fads that were prevalent at this time. These are topics that would have been in the media on March 20th, 2020.

Check out our personality summary for people who were born on March 20th, 2020.

Television shows that people were watching in March, 2020.

Popular video games that people were playing in March of 2020.

Television host. Deceased
Born on March 20th, 1928
He was not alive on this date.

Linkin Park singer. Deceased
Born on March 20th, 1976
He was not alive on this date.

Donald Trump was the President of the United States on March 20th, 2020.

Boris Johnson was the Prime Minister of the United Kingdom on March 20th, 2020.

Enter your date of birth below to find out how old you were on March 20th, 2020.
This information is not transmitted to our server.