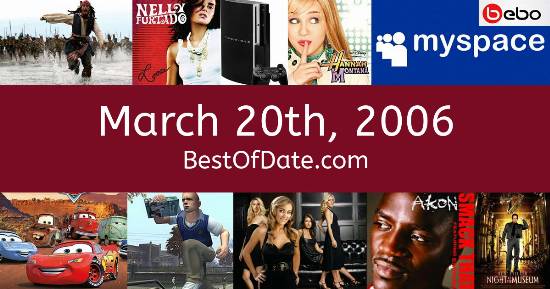 Songs that were on top of the music singles charts in the USA and the United Kingdom on March 20th, 2006.

The date is March 20th, 2006 and it's a Monday. Anyone born today will have the star sign Pisces. Spring has arrived and the days have become longer.

St. Patrick's Day of 2006 has recently come and gone. In America, the song So Sick by Ne-Yo is on top of the singles charts. Over in the UK, No Tomorrow by Orson is the number one hit song.

George W. Bush Jnr. is currently the President of the United States and the movie V for Vendetta is at the top of the Box Office. In the United Kingdom, Tony Blair is the current Prime Minister. Internet users are using MSN Messenger to chat with each other online.

If you were to travel back to this day, notable figures such as Proof, Charles Haughey, Steve Irwin and James Brown would all be still alive. On TV, people are watching popular shows such as "Punk'd", "Extreme Makeover: Home Edition", "Boston Legal" and "Prison Break". Meanwhile, gamers are playing titles such as "RuneScape", "Tom Clancy's Splinter Cell: Chaos Theory", "Lego Star Wars: The Video Game" and "Guitar Hero".

Kids and teenagers are watching TV shows such as "Grizzly Tales for Gruesome Kids", "LazyTown", "American Dragon: Jake Long" and "Ben 10". If you're a kid or a teenager, then you're probably playing with toys such as the PlayStation 2, Bratz dolls, RoboSapien (toy robot) and the Xbox 360.

If you are looking for some childhood nostalgia, then check out March 20th, 2012 instead.

Television host. Deceased
Born on March 20th, 1928
He was not alive on this date.

Tony Blair was the Prime Minister of the United Kingdom on March 20th, 2006.

Enter your date of birth below to find out how old you were on March 20th, 2006.