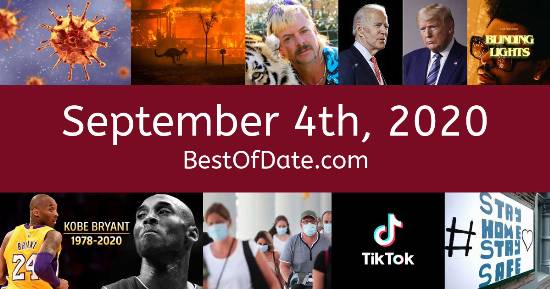 Songs that were on top of the music singles charts in the USA and the United Kingdom on September 4th, 2020.

The movie "The New Mutants" was at the top of the box office on September 4th, 2020.

The date is September 4th, 2020 and it's a Friday. Anyone born today will have the star sign Virgo. Currently, people have "that Friday feeling" and are looking forward to the weekend.

Schools and colleges are starting again and Autumn has officially arrived. As a result, temperatures are beginning to cool and trees are starting to shed their leaves. In the United States, it is the Friday before Labor Day weekend and many Americans are planning barbecues and other gatherings. In America, the song WAP by Cardi B is on top of the singles charts.

Over in the UK, Head & Heart by Joel Corry featuring MNEK is the number one hit song. Donald Trump is currently the President of the United States and the movie The New Mutants is at the top of the Box Office. In the United Kingdom, Boris Johnson is the current Prime Minister.

Despite restrictions and mask wearing, many countries and US states are beginning to witness a "second wave" of Covid-19. As a result, many countries are tightening restrictions and going back into a second lockdown. If you were to travel back to this day, notable figures such as Ruth Bader Ginsburg, Sean Connery, Diego Maradona and Larry King would all be still alive. On TV, people are watching popular shows such as "Grey's Anatomy", "The Walking Dead" and "Black-ish".

Meanwhile, gamers are playing titles such as "Call of Duty: Modern Warfare", "Death Stranding" and "Pokémon Sword and Shield". Kids and teenagers are watching TV shows such as "Horrid Henry", "Agents of S.H.I.E.L.D." and "The Loud House". If you're a kid or a teenager, then you're probably playing with toys such as the PlayStation 4 and the Xbox One.

Donald Trump was the President of the United States on September 4th, 2020.

Boris Johnson was the Prime Minister of the United Kingdom on September 4th, 2020.

Enter your date of birth below to find out how old you were on September 4th, 2020.

Here are some fun statistics about September 4th, 2020.

Have something to say about September 4th, 2020?