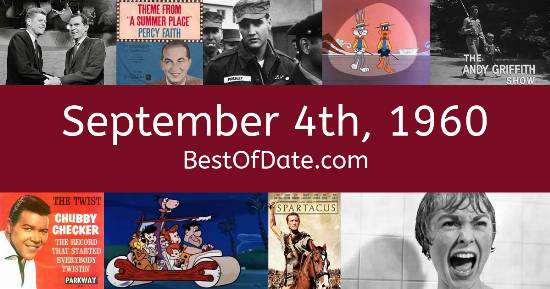 Songs that were on top of the music singles charts in the USA and the United Kingdom on September 4th, 1960.

The date is September 4th, 1960, and it's a Sunday. Anyone born today will have the star sign Virgo. Currently, people are enjoying their weekend.

Schools and colleges are starting again and Autumn has officially arrived. As a result, temperatures are beginning to cool and trees are starting to shed their leaves. In the United States, it is Labor Day weekend. People are attending barbecues and other gatherings. To many Americans, Labor Day represents the end of summer 1960. In America, the song It's Now Or Never by Elvis Presley is on top of the singles charts.

Over in the UK, Apache by The Shadows is the number one hit song. Dwight David Eisenhower is currently the President of the United States, and the movie Ocean's 11 is at the top of the Box Office. In the United Kingdom, Harold Macmillan is the current Prime Minister.

If you were to travel back to this day, notable figures such as Clark Gable and Ernest Hemingway would be still alive. On TV, people are watching popular shows such as "Have Gun - Will Travel", "Wagon Train", "Maverick" and "Bonanza". Children and teenagers are currently watching television shows such as "Mighty Mouse Playhouse", "The Gumby Show", "The Adventures of Spunky and Tadpole" and "The Adventures of Rocky and Bullwinkle and Friends".

Popular toys at the moment include the likes of Wooly Willy, the Frisbee, Barbie and Astrobase.

These are trending news stories and fads that were prevalent at this time. These are topics that would have been in the media on September 4th, 1960.

Check out our personality summary for people who were born on September 4th, 1960.

If you are looking for some childhood nostalgia, then you should check out September 4th, 1966 instead.

Singer.
Born on September 4th, 1981
She was born exactly 21 years after this date.

Dwight David Eisenhower was the President of the United States on September 4th, 1960.

Harold Macmillan was the Prime Minister of the United Kingdom on September 4th, 1960.

Enter your date of birth below to find out how old you were on September 4th, 1960.
This information is not transmitted to our server.

Here are some fun statistics about September 4th, 1960.