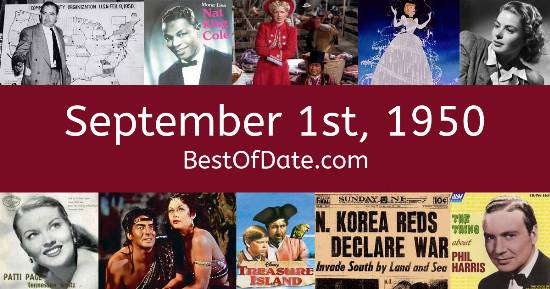 The best-selling single on September 1st, 1950 was "Goodnight Irene" by Gordon Jenkins.

The date is September 1st, 1950 and it's a Friday. Anyone born today will have the star sign Virgo. Currently, people have "that Friday feeling" and are looking forward to the weekend.

Schools and colleges are starting again and Autumn has officially arrived. As a result, temperatures are beginning to cool and trees are starting to shed their leaves. In the United States, it is the Friday before Labor Day weekend and many Americans are planning barbecues and other gatherings. In music, the song "Goodnight Irene" by Gordon Jenkins is the best-selling record at the moment.

Harry S. Truman is currently the President of the United States and Clement Attlee is the Prime Minister of the United Kingdom. In fashion, women are sporting the popular "The New Look" by Christian Dior. This formal style includes rounded shoulders, a full-skirted silhouette and a tight waist. Meanwhile, men are beginning to follow a new "Teddy Boy" trend that involves greased-back hair, extremely narrow trousers and velvet-collared jackets. It's 1950, so radio stations and jukeboxes are playing songs from artists such as Nat King Cole, Gordon Jenkins & The Weavers, Anton Karas, Gary & Bing Crosby, Teresa Brewer, Guy Lombardo and Red Foley.

In Asia, the Korean War is raging on between South Korea and North Korea. On TV, people are watching popular shows such as "The Ed Sullivan Show", "The Lone Ranger", "Space Patrol" and "The Gene Autry Show". Kids and teenagers are watching TV shows such as "Looney Tunes", "Tom and Jerry", "Crusader Rabbit" and "Telecomics".

If you're a kid or a teenager, then you're probably playing with toys such as Toy Guns, Spinning Tops, Tiny Tears (doll) and BAS-KET Miniature Basketball.

If you are looking for some childhood nostalgia, then check out September 1st, 1956 instead.

Wrestler. Deceased
Born on September 1st, 1961
He was born exactly 11 years after this date.

Irish TV presenter.
Born on September 1st, 1964
He was born exactly 14 years after this date.

English soccer player.
Born on September 1st, 1989
He was born exactly 39 years after this date.

Actress.
Born on September 1st, 1996
She was born exactly 46 years after this date.

BTS member.
Born on September 1st, 1997
He was born exactly 47 years after this date.

Harry S. Truman was the President of the United States on September 1st, 1950.

Clement Attlee was the Prime Minister of the United Kingdom on September 1st, 1950.

Have something to say about September 1st, 1950?

Enter your date of birth below to find out how old you were on September 1st, 1950.

Here are some fun statistics about September 1st, 1950.